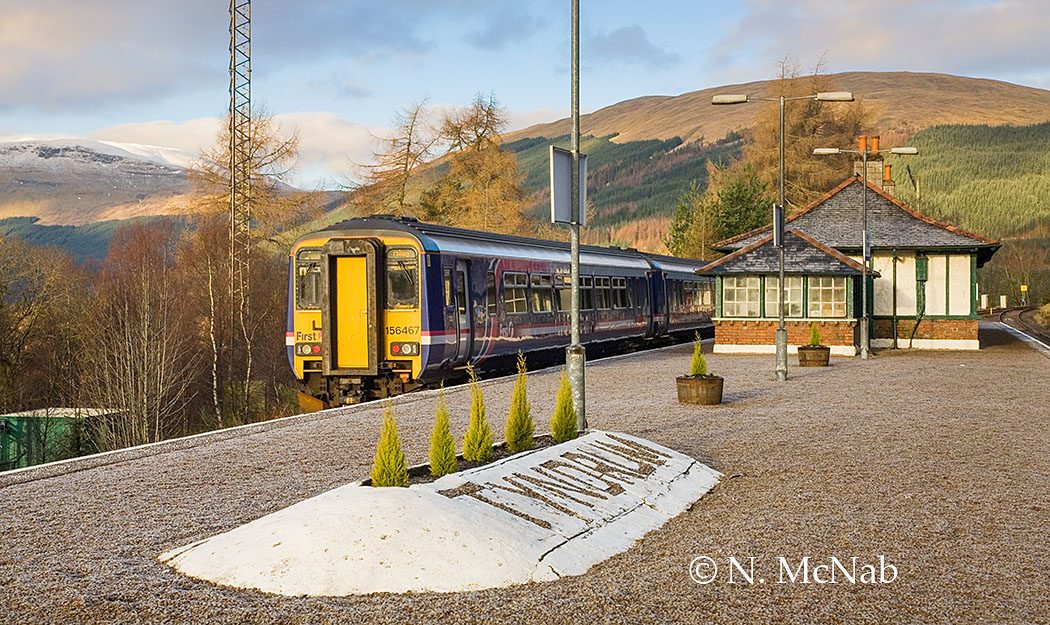 Upper Tyndrum station, on the Glasgow-Fort William line, is situated high above the village. (It was renamed from “Tyndrum Upper” to avoid confusion with “Tyndrum Lower” station on the Glasgow-Oban line). It is unstaffed and less frequently used because of its location with access via a steep and narrow road. In the above picture, taken in 2009, the station, a standard West Highland Line ‘Swiss Chalet’ style building, retains the original colour scheme. This has now been replaced with the ScotRail corporate colours (see Garelochhead Station for example). The station building now houses the offices of Scotgold Resources Ltd, an Australian company that has reopened a gold mine in Glen Cononish in the hills just south of Tyndrum.

Tyndrum (Taigh an Droma) is a small village which has developed as a popular tourist stop because of its strategic position where the road to Oban branches off the A82 Glasgow to Inverness trunk road. For this reason there is  plenty of accommodation,  restaurants, shops and a campsite.

Picture below is the view you would see from the train window as the train approaches Upper Tyndrum Station from the south. The mountain is Ben Lui (Beinn Laoigh) which translates as Calf Mountain. The train climbs gradually above the

road on the long ascent to the Tyndrum summit. Below and beyond the road and the first band of trees the Oban section of the West Highland Lines leads to Tyndrum Lower Station. Many of the service trains and all winter services run as a combined Oban and Fort William/Mallaig service from Glasgow and divide/couple together at Crianlarich. Passengers on either line can often observe the ‘other half’ of their train across the valley (Strath Fillan). Click on the picture on the left to ‘zoom in’ on the Oban Train as it approaches Tyndrum Lower. 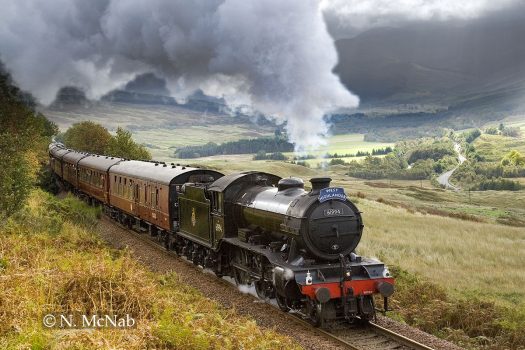 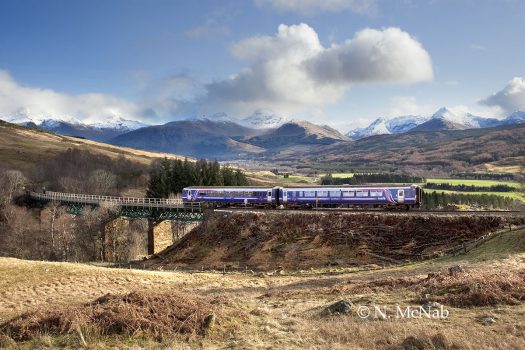 The K4, ‘The Great Marquess’, locomotive in the above picture, was designed by Gresley specifically for the North British line from Glasgow to Mallaig. The line imposes real challenges because of the steep gradients, tight curves and limited allowable axle weight. The K4 has 3 cylinders, a 2-6-0 wheel arrangement, 200psi boiler and a 36,598lb tractive effort. No 61994 entered service in 1938 (original LNER no. 3442) and is the only K4 in preservation. The locomotive is owned by John Cameron and located at Thornton in Fife. 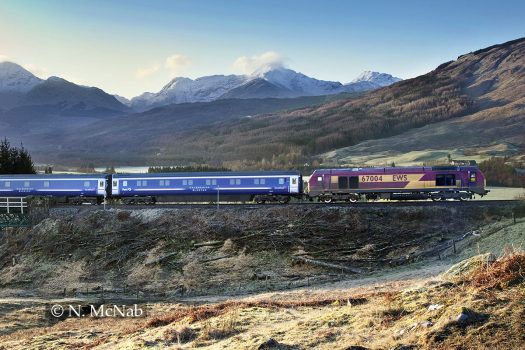 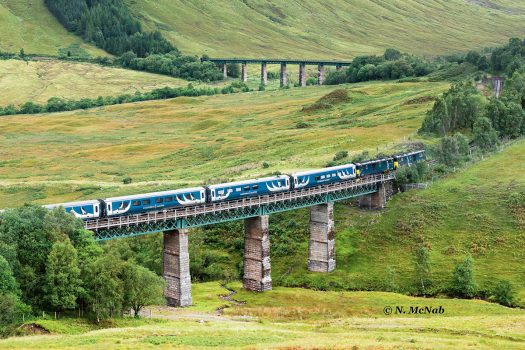 Above left. The Class 67 diesel electric locomotives were originally built for high speed main line duty. It has a high axle load and this required the locomotive to run at reduced speed on the West Highland Line, particularly when crossing the steel lattice girder viaducts, of which there are many. In addition to the sleeping berths provision was made for a small number of seated passengers who could join and leave at stations on the line.

The service is now operated by Serco and uses class 73/9 locomotives. Serco have rebranded and upgraded the service, commissioned and installed new rolling stock which was manufactured by CAF in Spain. The image on the right shows the present Caledonian Sleeper with the new livery crossing the first of the two lattice steel bridges which are an integral part of the ‘Great Horse Shoe Curve’ at Auch, The curve was provided to ease the change in altitude between Auch and the summit just above Tyndrum.