Upper Tyndrum Station History. Why it changed its name and more. 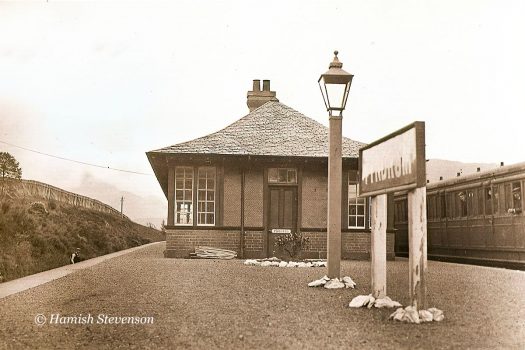 Upper Tyndrum station was opened on 7 August 1894 by the West Highland Railway At that time it was simply named ‘Tyndrum’; as was the neighbouring station down the valley on the Callander & Oban route. Thanks to the ‘contouring’ technique of engineer Charles Forman, Upper station is perched high on the hillside, on the climb to County March, with a dauntingly steep access road. It bears remembering that the Glasgow & North Western Railway’s proposed line of 1884 would have achieved an easier gradient through Strathfillan by tunnelling at the summit.

The one remaining siding at Upper Tyndrum today was formerly a headshunt, which gave access to a goods yard at a lower level than the station. Camping coaches could be seen in the sidings for many years. The ‘Swiss Chalet’-style signal box was located closer to the main station building than most others on the line, presumably for sighting reasons. It had a Saxby & Farmer ‘Duplex Tappet’ type frame, which held fifteen levers. The frame is now at the Invergarry & Fort Augustus Railway Museum. Upper Tyndrum box remains in good condition today, thanks partly to the late Geoff Evison, who helped restore the building with his father Colin.

Callander & Oban Tyndrum (opened 1 August 1873) was senior to West Highland Tyndrum by nearly a quarter-century and even in the 1950s a mail bus connection to Ballachulish and Kinlochleven meant that the former retained something of the ‘railhead’ status which it had enjoyed in the 1870s. 1953 saw the stations become ‘Tyndrum Lower’ and ‘Tyndrum Upper’ respectively, after nationalisation by British Railways. In the experience of most travellers in the last years of steam under BR, Tyndrum Upper was not a bustling place – though it became the regular crossing point of the evening Glasgow-Mallaig and the “extra” summer service south from Fort William. (Two of the “Ghost” goods trains crossed there too, in the small hours.)

There was a change in signalling at Tyndrum Upper in 1967, when ‘tokenless block’ became the norm between Crianlarich and Rannoch, replacing the ‘electric token block’ system. The down loop became bi-directional as well. This all allowed for faster running, without the need for drivers to slow to exchange tokens. It meant Tyndrum Upper box could ‘switch out’ when not required, typically at weekends. The image shows the semaphore signals on the approach from the north.

1985 saw ‘tokenless block’ abolished and the old signalling system come back in at the station, but later that year the semaphore signals were removed in the run-up to Radio Electronic Token Block (RETB) being adopted. Token exchanges continued until RETB took over on 27 March 1988, thus after almost a century, a signalman was no longer required. The new system resulted in the second name change to ‘Upper Tyndrum’ in 1992, to avoid the station being confused with Tyndrum Lower in radio messages. Train Protection & Warning System (TPWS) was added in 2003, with blue lights added to the ‘Stop’ boards at the platform ends. These lights are normally illuminated continually to indicate that TPWS is working correctly. When a radio token is issued to a driver, TPWS is de-activated to allow the train to pass and the lights will flash intermittently. 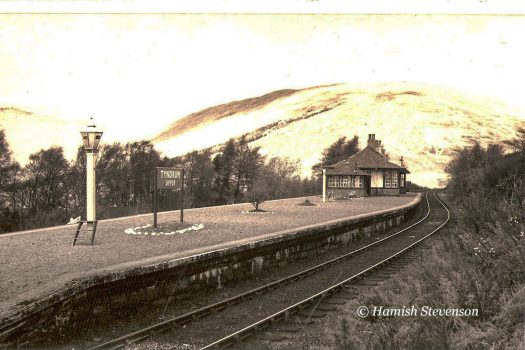 Tyndrum Upper long before it was renamed.