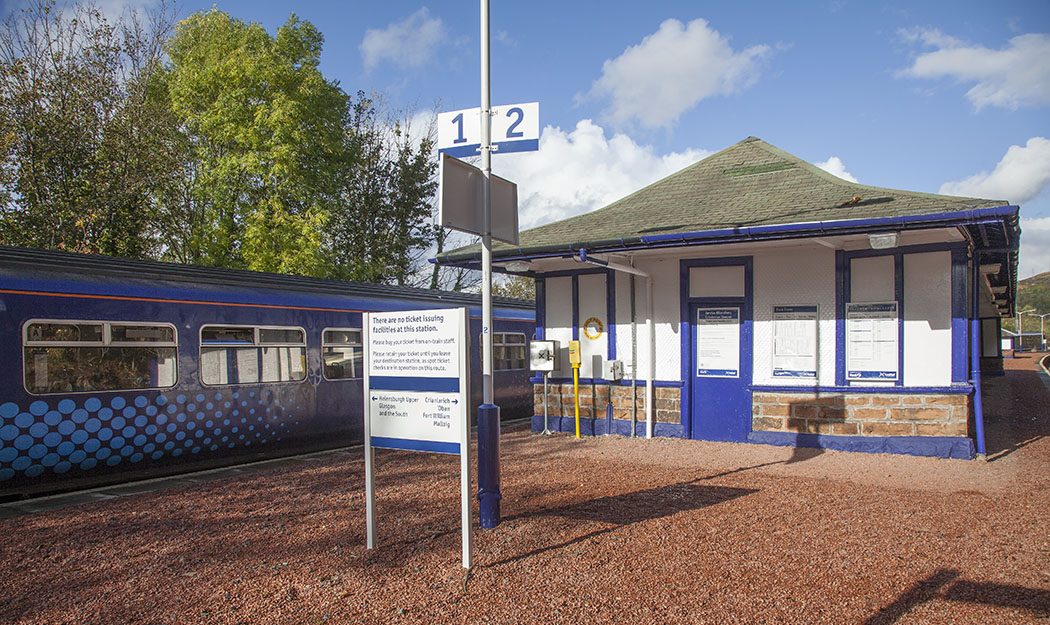 Garelochhead (Cean a’ Ghearrloch) is located at the head of the Gare Loch which is connected to the Firth of Clyde between the Roseneath peninsula and the town of Helensburgh. The Gare Loch has had a long history of involvement with the navy and is currently the the UK’s nuclear submarine base at Faslane, on the east side of the loch a mile south of the village. The railway line is located well above the village and is a demanding 150ft climb for walking passengers. 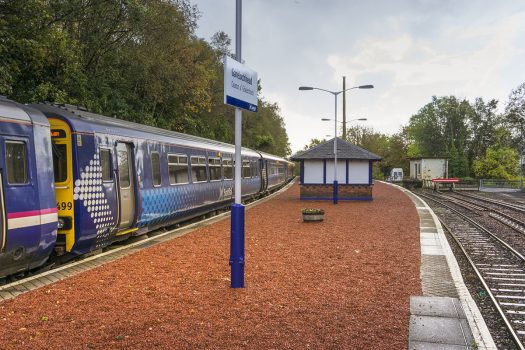 The station is built in the traditional West Highland line ‘Swiss chalet’ style on an island platform. The train in the picture is travelling north to Oban and Fort William/Mallaig and occupies what was the original Up line to Glasgow, however following the replacement of the original semaphore signalling with radio electronic tablet block line control, the running order was changed to RH working. The unoccupied line on the right is now the Up line to Glasgow. The station fabric is being maintained and the view shows the building finished in the ScotRail corporate livery. Perhaps controversial since the original cream and green colour scheme dates back to North British colours.  The building is currently unoccupied but plans have been made to refurbish the station and signal box for use by service veterans by the Garelochhead Station Trust.

The train is the 12.21 ex Glasgow Queen Street to Oban, Fort William and Mallaig train and sits at Garelochhead station at 13.21 on Friday 10th October 2014. The view south includes the redundant, and typical, West Highland platform signal box. The main station lies beyond. The scenery around Garelochhead and the nearby Roseneath peninsula is very attractive with its mixture of rugged hills and sheltered lochside views, moored yachts and Victorian villas. However the presence of the submarine base and the relative closeness of the Royal Naval Armanent Depot at Coulport means that the area is not exactly a rural idyll. An idea of the area can be appreciated by taking in the view west, over the town and loch. Click on the small image to view. 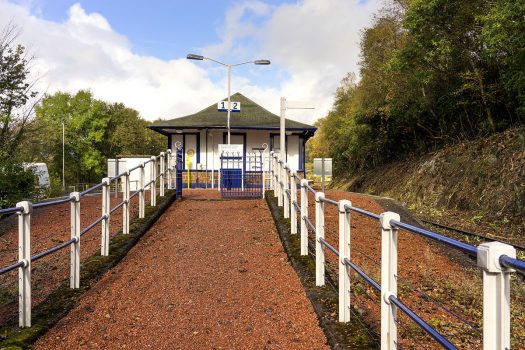 The entrance to the station is typical of the West Highland Line Stations with access to the central platform from the road via a pedestrian tunnel under the line and a steep slope and steps up to platform level. 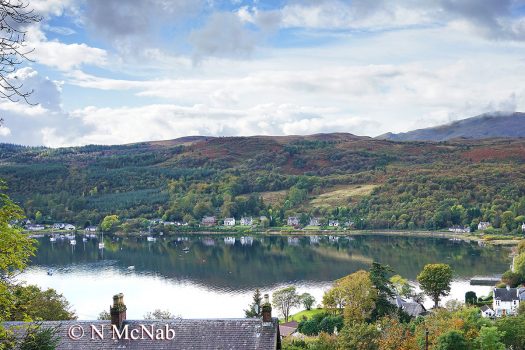 This view from the station platform gives an idea of the station’s location above the village and the attractive setting with the Roseneath peninsula on the other side of the loch. Click on the image for a wider view. 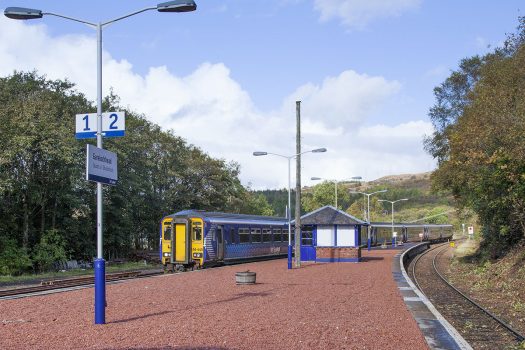 A 6-car train made up of 4 coaches from Mallaig and Fort William and two from Oban arrives on 10th October 2014. 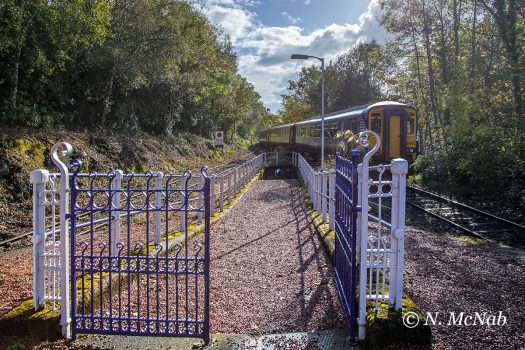 The same train, as on the left picture, has just departed. The view is back down the station access to the walkway below the track,

The train below has just passed Whislefield, close to where Loch Goil meets Loch Long, one mile north of Garelochhead on the long stretch to the next stop at Arrochar & Tarbet Station. The views are especially fine since the train travels on the line high above Loch Long. Until recently visitors were advised to travel in the winter or early spring since the lineside is heavily wooded and when the trees are in leaf much of the scenery is obscured by a ‘Tunnel of Trees’. In the last few years, through the efforts of our Society, funding from grants and the inclusion of a requirement on the franchise operator, a number of views have been ‘recovered’ and this spectacular section of the line is now more visible. It remains more rewarding to travel in winter or early spring before leaf burst. 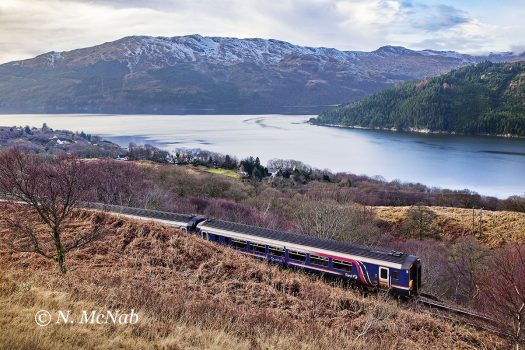 Passing above and just beyond Portincaple with Loch Long and the entrance to Loch Goil beyond. 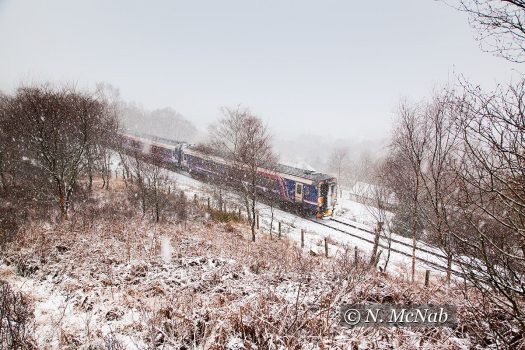 Northbound train meets a sudden snow storm as it passes Portincaple, on an early December afternoon, on route to Oban, Fort William & Mallaig. 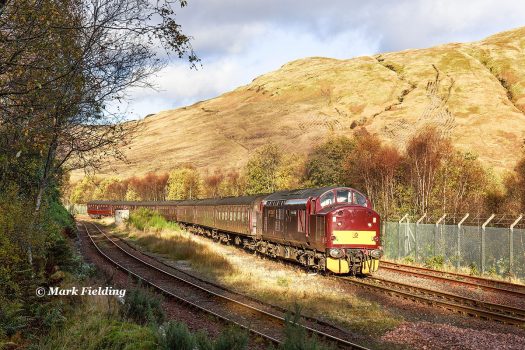 37516 Loch Laidon at Glen Douglas passing loop with the Jacobite ECS to Carnforth on 1st November 2016.

There are few modern images of trains at Glen Douglas. A station when the line was opened, it had a questionable purpose and now exists solely as a passing loop. Glen Douglas also provides rail access to an Admiralty Munitions store. As a result there is more railway infrastructure than the passing loop, retained to serve the needs of civilian freight and passenger services.

Mark’s picture shows a West Coast Class 37 Diesel locomotive returning a rake of coaches, deployed during the summer on the Fort William – Mallaig Jacobite Steam train, to their stable at Carnforth.