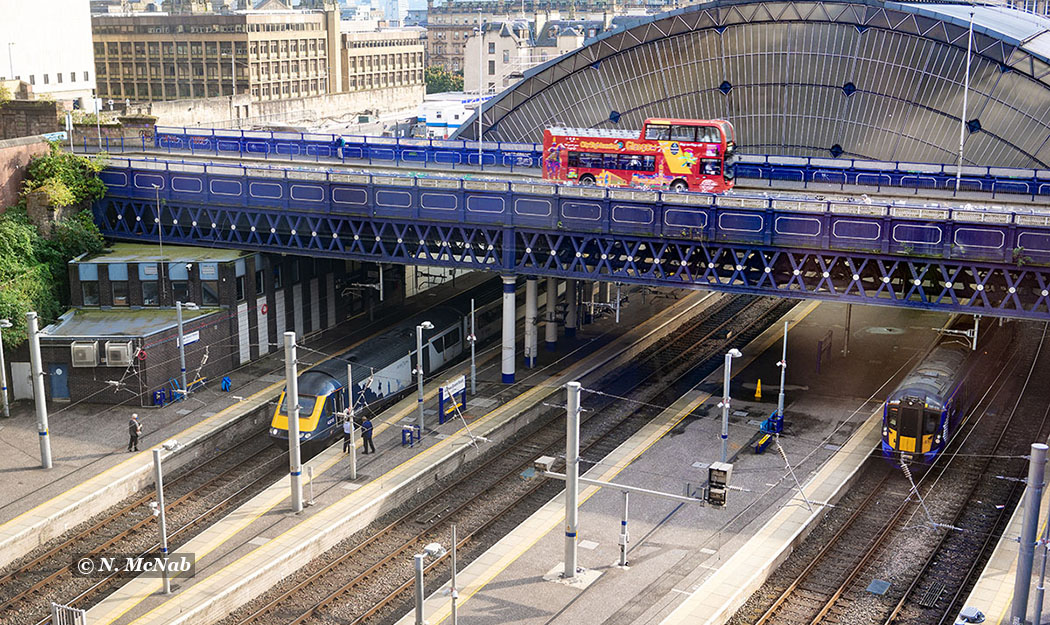 Trains depart from Queen Street through a long tunnel with a 1:42 gradient. The picture above was taken from Glasgow’s Buchanan Galleries shopping centre which straddles the departure lines as they enter what is known as the Cowlairs tunnel. The platforms were recently extended to accommodate longer trains as part of the project to upgrade and electrify the Edinburgh to Glasgow services. This work included a complete rebuild of the stations frontage and an extension of the concourse to accommodate the lengthened platforms. 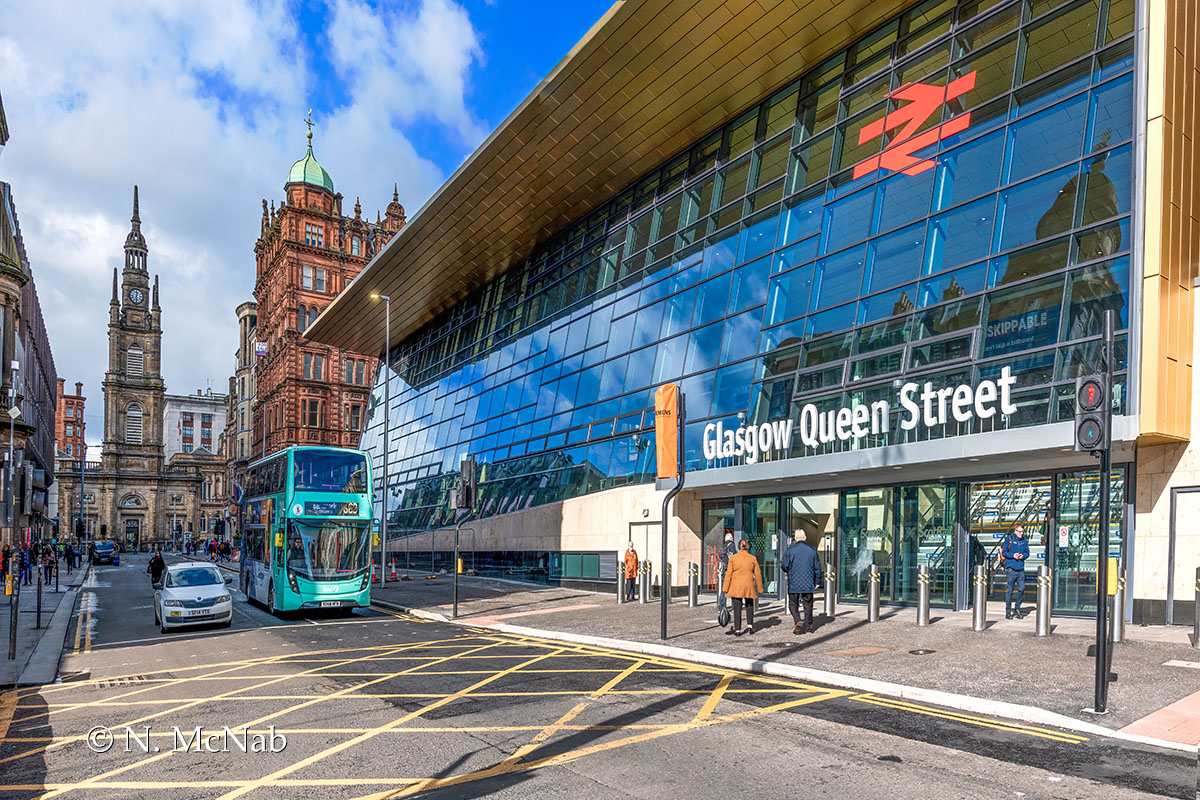 This amounted to a major development by Network Rail of the whole site, including the very modern frontage, seen in the above image. The main entrance is located on this elevation and faces towards George Square. The work required the demolition of an office block (Consort House) and part of the Millennium hotel to provide space for the new concourse and extended platforms. Extending the platforms on the rail exit end of the station was not an option because immediately beyond the end of the platforms the train enters the Cowlairs Tunnel and the immediate 1:42 incline. You can view Network Rail’s video of the demolition, site preparation and construction of the new Queen Street Frontage HERE 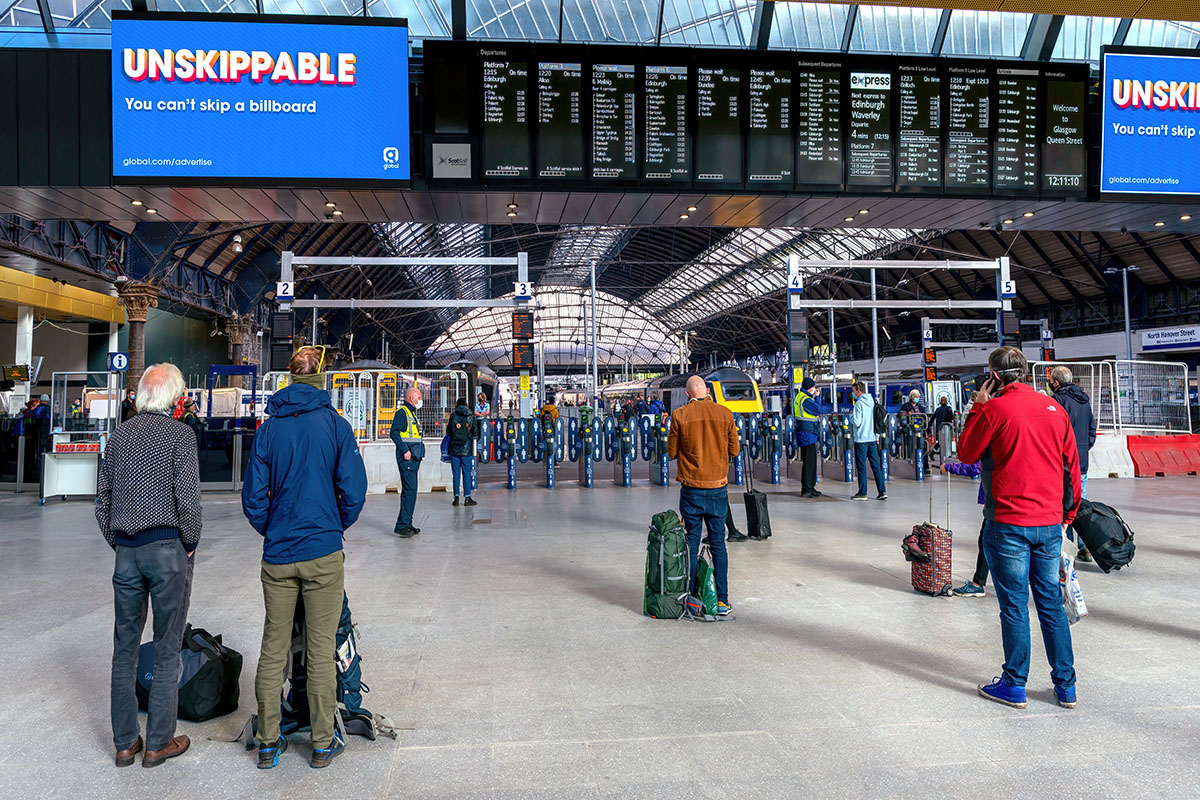 The starting point for journeys on the scenic West Highland Line to Oban, Fort William and Mallaig, Glasgow Queen Street station is in the centre of Scotland’s largest city, beside George Square and the majestic City Chambers.

Fort William/Mallaig is served by three daily departures (Mondays to Saturdays) from Glasgow, while Oban has six.  Some trains run combined, with a section for Oban, and a section for Fort William and Mallaig.   The two sections are uncoupled at Crianlarich which is the junction of the Oban and Fort William lines. On Sundays, there is one train in winter, with additional departures in summer.

Connecting trains from Edinburgh, Stirling, Perth, Dundee and Aberdeen also arrive in Queen Street. The station is also linked to Buchanan Street Subway station, and nearby Buchanan Bus Station. Glasgow Central, where trains from south and south-west Scotland and London arrive, is less than 10 minutes walk from Queen Street station. There is an inter-station bus service linking Central and Queen Street. 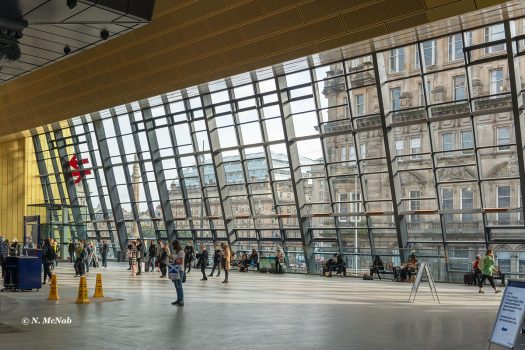 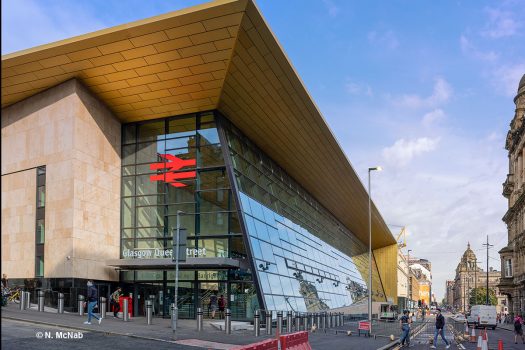 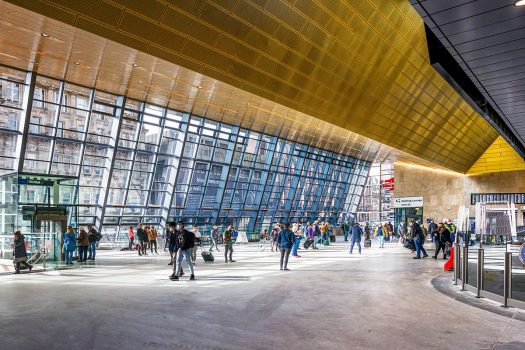 The main concourse viewed from the east side. 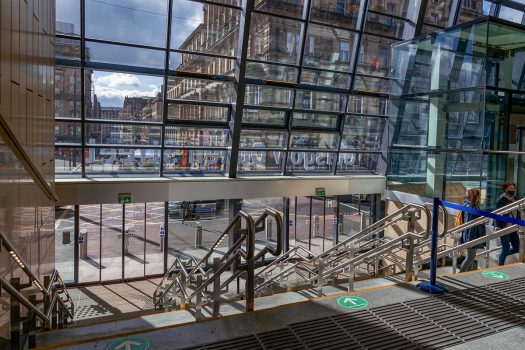 Despite Queen Street Station’s location on the corner of George Square, its status as Scotland’s 3rd busiest (in excess of 17 million passenger movements annually) and being Glasgow’s 2nd city centre station (the other is Glasgow Central, Scotland’s busiest with double the passenger numbers) it had until recently a very inauspicious entrance on George Street. With the completed redevelopment of Queen Street station the entrance and complete station façade has been replaced with a stunning modern glass front facing towards the west side of George Square and the building in the picture is now demolished to replace the current 1960s main entrance at George Square with a modern, 500m² glass frontage.  The picture shows the side entrance on Dundas Street which leads to the main concourse and gives quick access to the low level platforms. Click here to view the Dundas Street entrance in 2015. The images below illustrate the transformation with ‘Consort House’, which dominated the entrance in the image lower right, and the new frontage which replaced it, lower left. 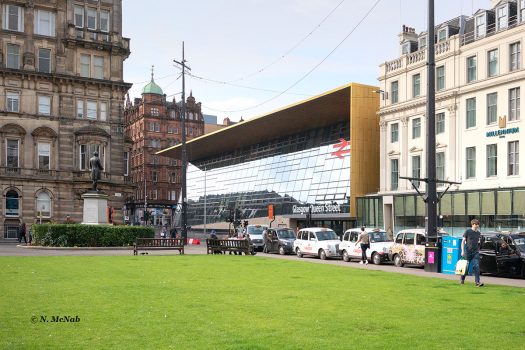 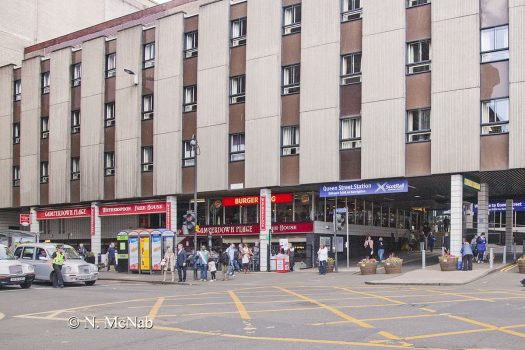 The Queen Street Station Entrance in 2014, viewed from George Square. 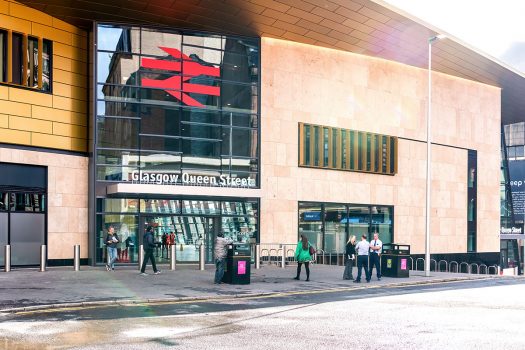 The Dundas Street entrance which is adjacent to the Glasgow Underground entrance. 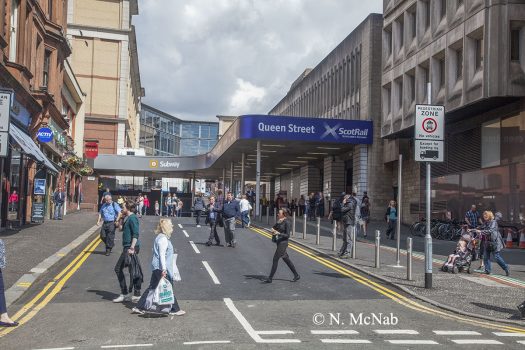 The Dundas Street entrance before the recent modernisation.

Queen Street Station is a magic gateway between Scotland’s premier cities, Glasgow and Edinburgh and the wonderful scenery of the West Highland Lines. It is also Glasgow’s railway gateway to Aberdeen, Dundee, Perth, Inverness and the scenic delights of the lines to Kyle of Lochalsh and the Far North. Queen Street has also low level platforms serving the north Glasgow conurbations from as far as Balloch (Loch Lomond) and Helensburgh in the west to Airdrie and Motherwell in the East. 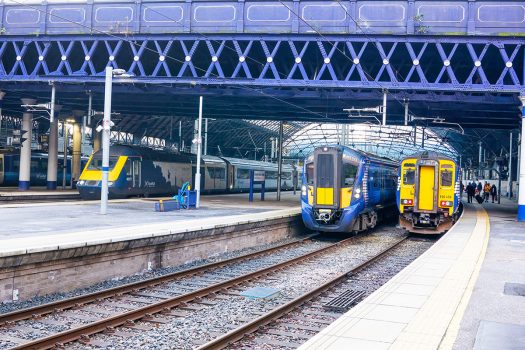 A view across the concourse.

The Cowlairs tunnel railway entrance and exit to Queen Street. 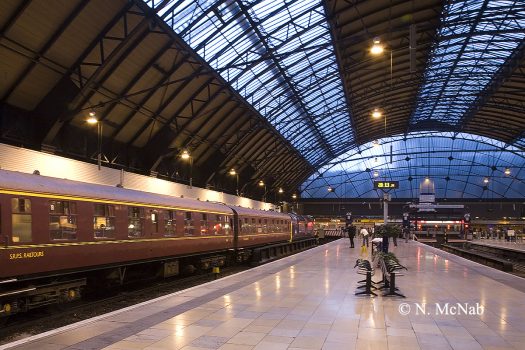 An evening view from the far end of the station. Carriages are Scottish Railway Preservation stock on a rail tour charter. 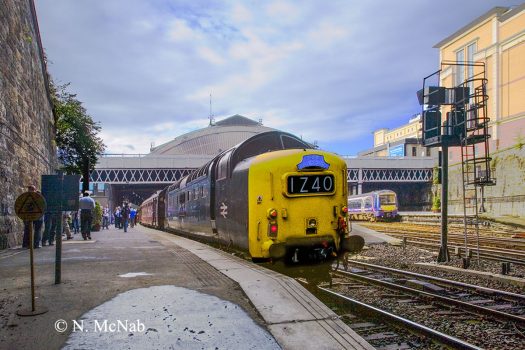 Taken from the throat of the Cowlairs tunnel. Deltic locomotive at head of a Scottish Railway Preservation train.