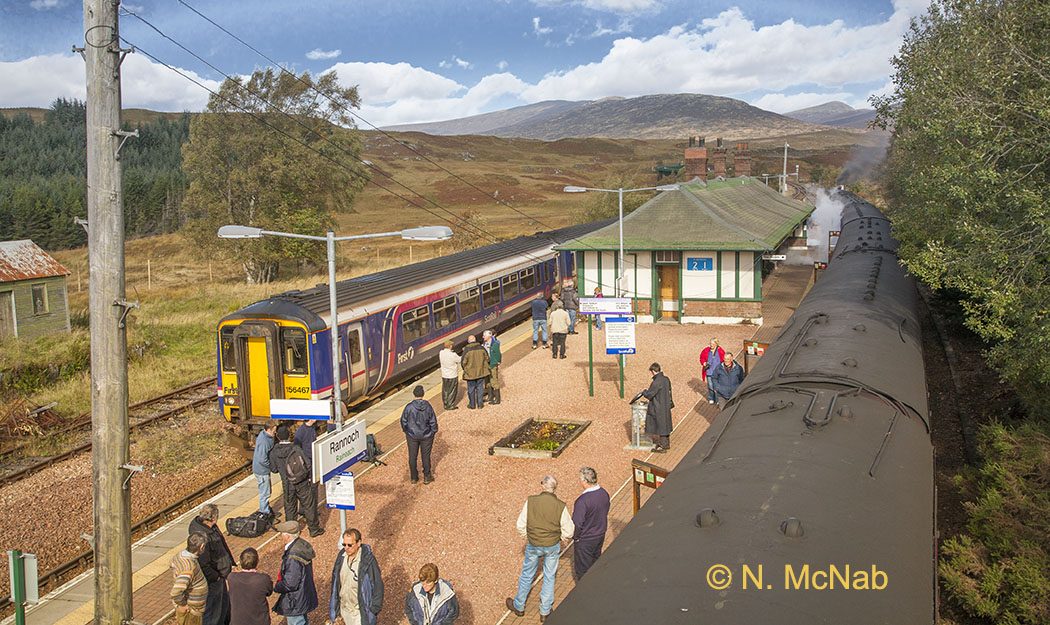 Rannoch Station on a busy weekend. A Glasgow-bound ScotRail train has just arrived from Fort William and a special steam charter waits for clearance to resume its journey north. The station shows the classic ‘Swiss Cottage’ architectural style of the original North British West Highland Line. It is a remote place, with a very small local population, connected by a narrow single-track road to the nearest town of Pitlochry, 40 miles to the east.  Rannoch Station Tearoom is a very welcome refuge for walkers and passengers have been known to phone ahead to have refreshments delivered to the train when no onboard catering was available.  The Moor of Rannoch hotel is adjacent to the station.

Rannoch Station is located half-way on the railway’s route across Rannoch Moor.  It is an unusually isolated/remote station, albeit not quite as remote as the next station north, Corrour, which is not even favoured with a public access road. The line crosses remote country and a landscape which is hazardous and arduous to access, even dangerous. Viewing the images on this site will illustrate just how remote the line is. 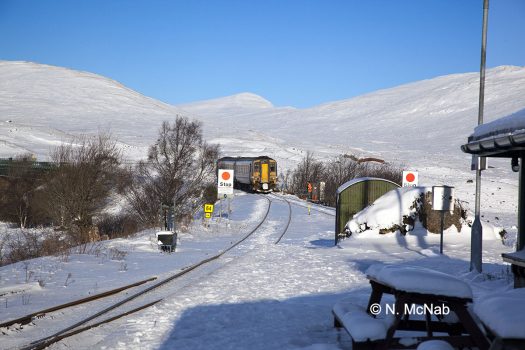 -8C on a January morning and a two-coach 156 DMU enters Rannoch Station. The engineer beside the train has just released the frozen points. 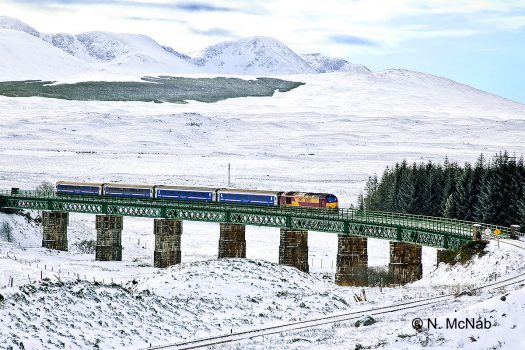 A mid-winter morning and the London – Fort William ‘Caledonian Sleeper’ train has just left Rannoch Station as it crosses the Rannoch Viaduct. 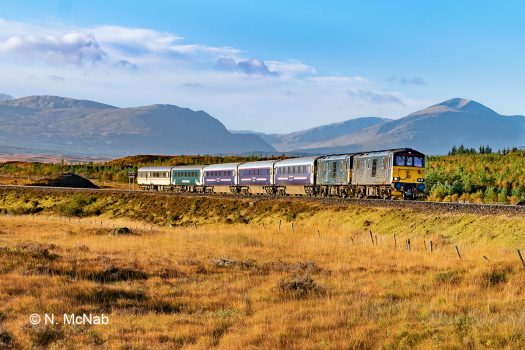 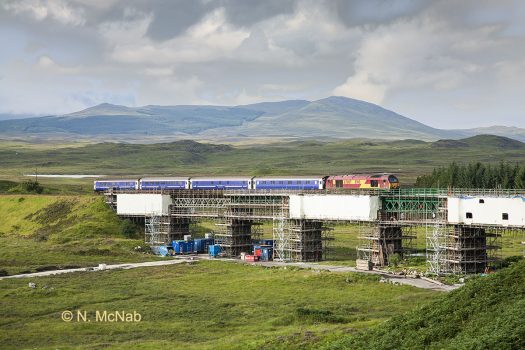 The Caledonian Sleeper hauled by a class 67 diesel locomotive. The viaduct is undergoing a refurbishmemt, May 2008.

The steel lattice viaduct is typical of the structure of almost all the viaducts on the West Highland line between Helensburgh and Fort William. Most are built on curves to simplify the task of constructing the original railway. The construction was also chosen to reduce costs. They are relatively light and this, combined with the curve, makes it necessary to restrict the crossing speed for heavy locomotives. 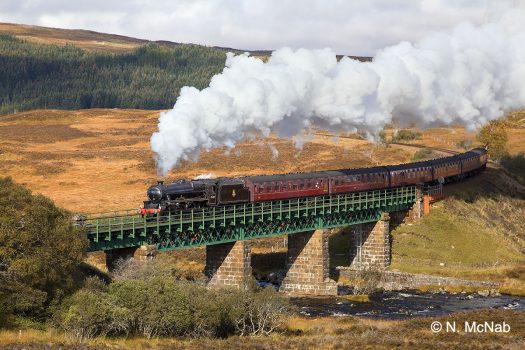 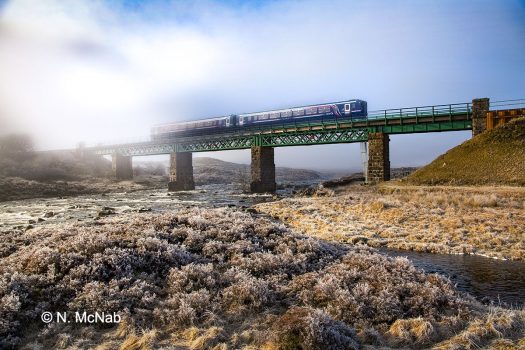 In addition to the Rannoch Viaduct, just north of Rannoch Station, the railway crosses another viaduct about a mile south of the station where the line crosses a river named ‘Garbh Ghaoir’ which drains the vast area of Rannoch Moor and lochs such as Loch Laidon. The river connects to Loch Rannoch and is a link in the extensive Loch Tummel hydro scheme. The name Garbh Ghaoir refers to its very rocky river bed and the sound produced by the rapid flow of water over and between the rocks – Garbh is Gaelic for ‘rough’ and Ghaoir suggests the sound of hissing steam. Presumably the river, when heard from a distance, sounded like a boiling kettle to the local Gaelic speaking people.

The Rannoch Viaduct is one of the most photographed locations on the West Highland Line since it is easy to access, although a long drive or rail journey is required. The ground is uncompromisingly challenging with soft bog, sink holes, deep creeks and many small and dangerous pools. In this video a special charter, the LNER, K4 steam locomotive, ‘The Great Marquis’, is seen leaving Rannoch Station and crossing the viaduct towards Corrour. 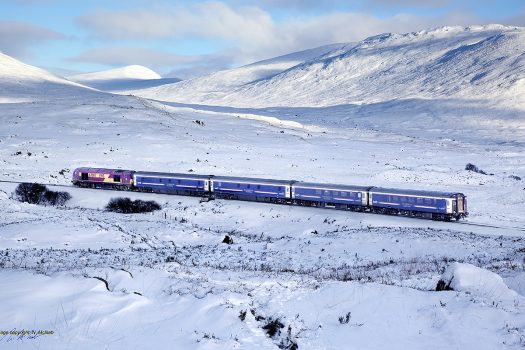 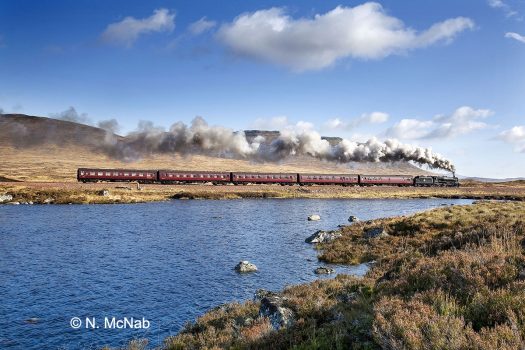 A steam charter heading south towards Rannoch Station, passes ‘Lochan a’ Chlaidheimh’, The Sword Loch, between Corrour and Rannoch. 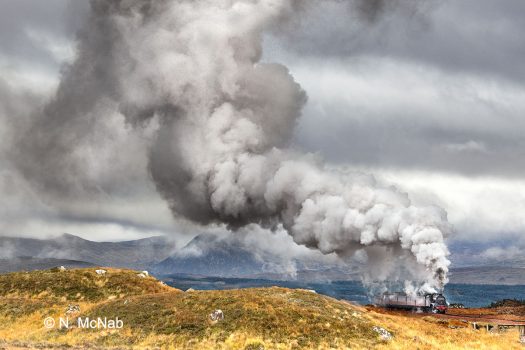 An impressive display of steam from ‘Black 5’ 44871 as it storms the climb onto the highest section across Rannoch Moor. Click image for a larger and different view. 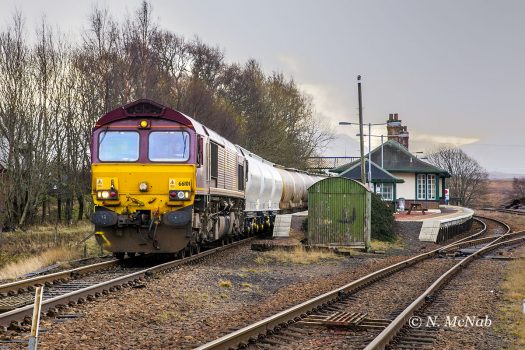 Class 66 locomotive stopped at Rannoch Station with a train of alumina wagons for the aluminium smelter at Fort William. 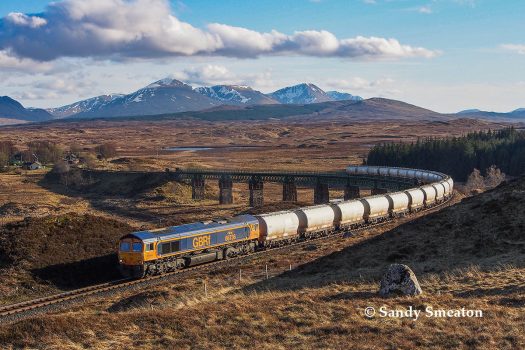