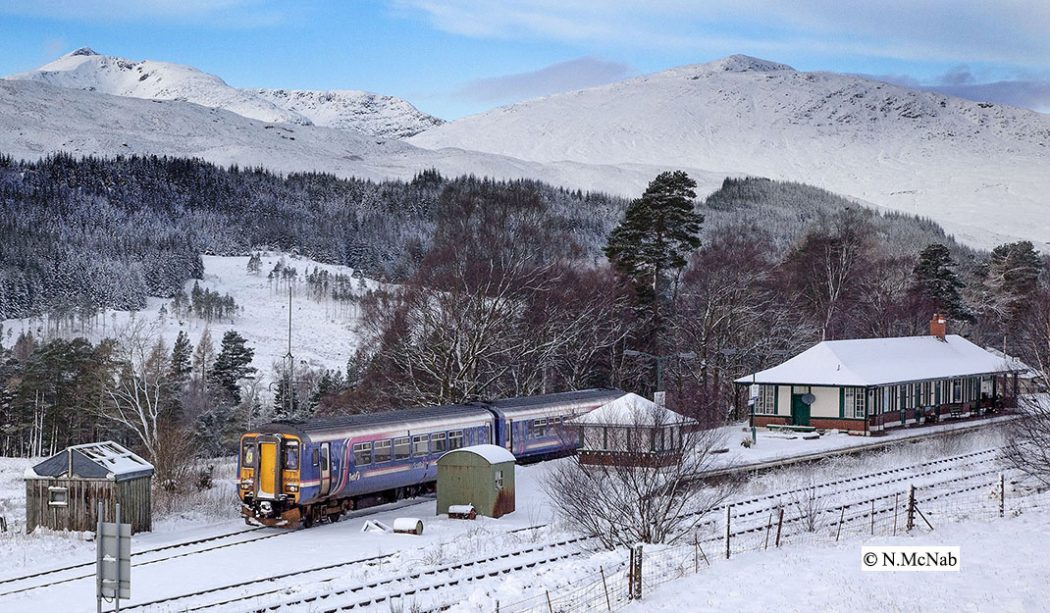 Bridge of Orchy Station is a stereotypical West Highland Line ‘Swiss chalet’ style building located on a central platform with pedestrian access under the railway and up a flight of steps to the platform. In the picture from December 2009 the building is finished attractively in the West Highland green and cream scheme. The building is currently in use as a successful bunkhouse, the West Highland Way Sleeper, and has a smart well-kept appearance. 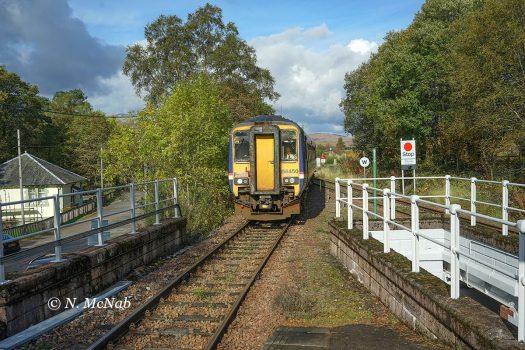 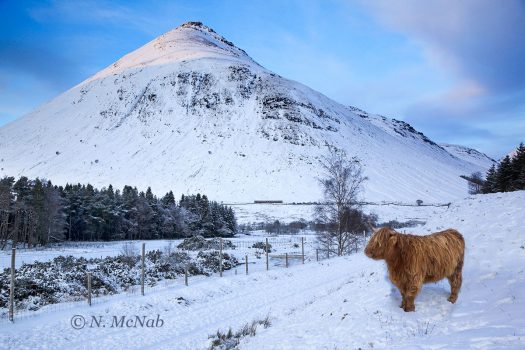 Just south of Bridge of Orchy is Auch Glen where a Glasgow-bound train has just left Bridge of Orchy. It can be seen in the distance passing under and dwarfed by the bulk of Ben Dorain.

Bridge of Orchy (Drochaid Urchaidh) is a small settlement with notable hotel, bar/restaurant at the head of Glen Orchy.  It is on the West Highland Way long distance footpath, and is the starting point for climbing the Munros Beinn an Dothaidh and Beinn Dorain.

The rail passenger is treated to a spectacular feature between Tyndrum and Bridge of Orchy – the Great Horseshoe Curve at Auch where the line turns through 180 degrees and crosses two lattice steel viaducts beneath the mountains of Beinn Dorain and Beinn Odhar. See the pictures below and Click on the image for a short video clip of steam power at Auch.

The scale of the Great Horseshoe Curve at Auch can be seen in the  picture with the line of the railway outlined against the snow. Bridge of Orchy Station is just out of the picture on the lower left. On the right hand side the line reaches the summit before descending into Upper Tyndrum Station. This marks one of the longest climbs on this section of the line with a sustained 1 in 50 gradient for 3 miles. The picture was taken from the upper slopes of Beinn Bhreac – liath. Click on the picture for a larger view.

The picture below shows a Fort William & Mallaig train passing Loch Tulla, 1 mile from Bridge of Orchy Station. The mountains behind form what is named the ‘Black Mount’ and on the right, the Clachlet (Clach Leathad which means stony slope) which is close to the Glen Coe Skiing development on Meall a’ Bhuiridh – Hill of the roaring – which is named after the roaring of the red deer stags in the autumn rut. The roaring stag on the right was photographed on the hills above Loch Tulla near Inveroran. 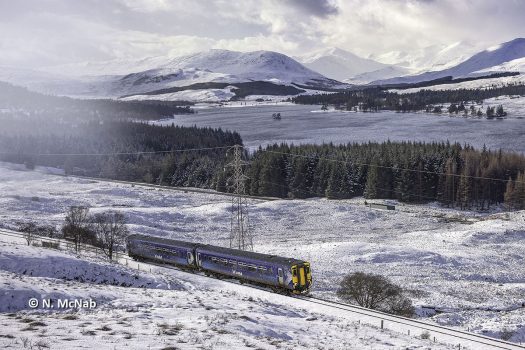 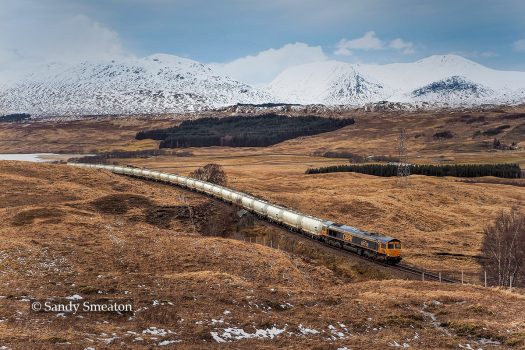 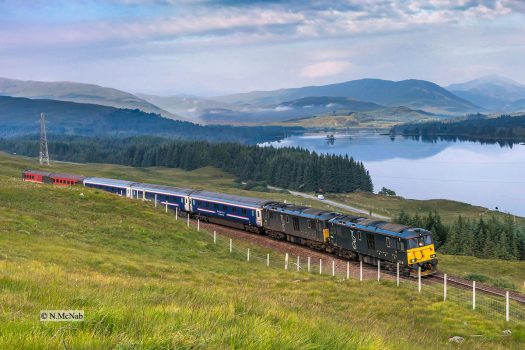 The Fort William-bound Caledonian Sleeper passes above Loch Tulla, north of Bridge of Orchy, on a warm summer morning. 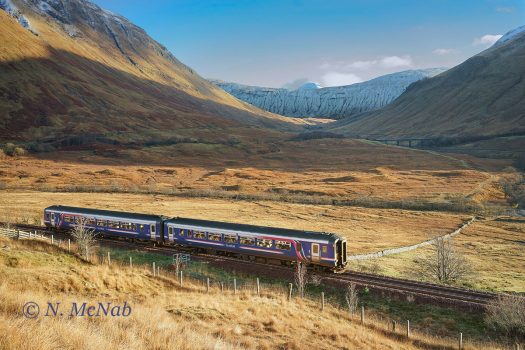 A two-car ScotRail winter service, one mile from Bridge Of Orchy, has just completed its circuit of the ‘Great Horseshoe’ curve and viaducts at Auch on its northward journey to Fort William and Mallaig.

Shortly after the line passes the end of Loch Tulla it branches away from all public roads. For the next 30 miles, with the exception of the long single track road from Pitlochry which terminates at Rannoch Station, and the unsurfaced private estate road at Corrour, the line crosses the wilderness of Rannoch Moor far from human habitation. Half way between Bridge of Orchy and Rannoch Stations there is a passing loop at Gorton .Although not unusual in other parts of the world, there is nowhere else in Britain where train travellers can experience a true sense of passing through an uninhabited wilderness. The sense of wildness is maintained until the line reaches the end of Loch Treig at Fersit and Tulloch Station. The crossing excites those with an adventurous spirit whether on a sunny summer day, a day of hanging grey mist, or a brilliant snow-covered winter day. 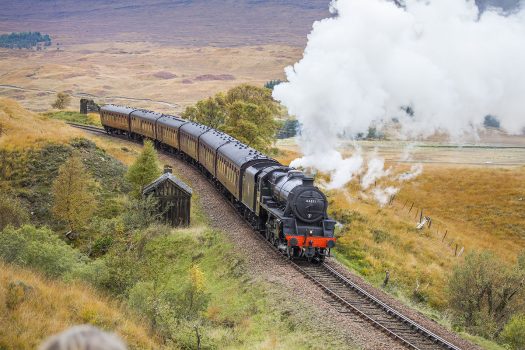 The train on the left is a special charter hauled by ‘Black 5’ 44871, passing Achallader, en route, and about 6km north, of Bridge of Orchy. This is close to the point where the railway re-joins visual contact with the public road network after its long journey of 30 miles from Tulloch in Glen Spean. A journey through the wild landscape of Loch Treig, the climb to Corrour and across the wilderness of Rannoch Moor. This picture, although taken on a dull day, shows the rich warm colours of autumn. A line which amply rewards the traveller with fine scenery, whatever the weather. 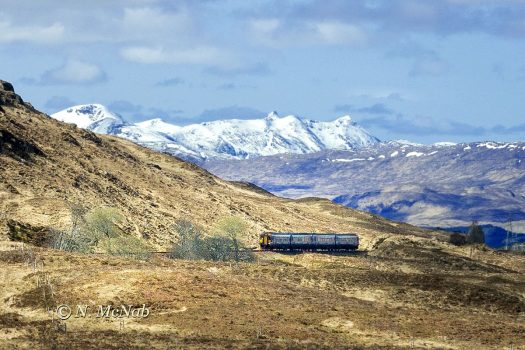 Ist May and the Fort William/Mallaig train climbs towards Gorton loop between Bridge of Orchy and Rannoch Stations. This is a wild and lonely section and gives an unusual view back to Ben Cruachan, on the line to Oban, 22 miles away 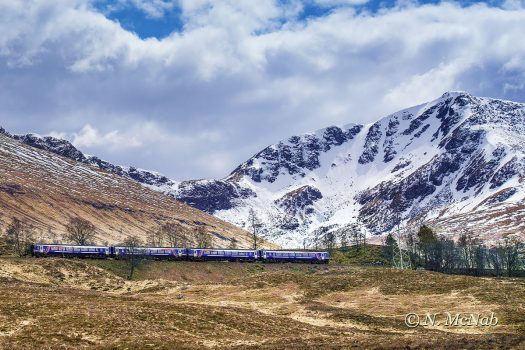 The 11.22 ex-Glasgow Queen Street train passes under Ben Achaladar in May 2015. This is a part of Scotland which cannot be seen by bus and car travellers. It can only be seen by walkers, estate employees and travellers on the West Highland Line.