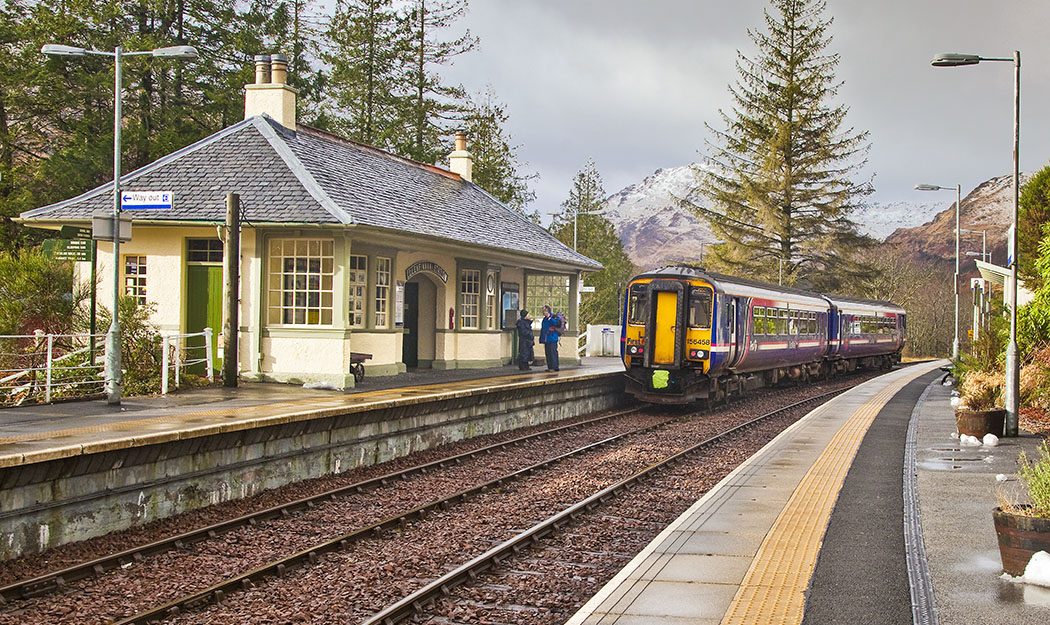 A Mallaig bound service from Glasgow Queen Street and Fort William at Glenfinnan Station on a cold winter evening.

The station building contains Glenfinnan Station Museum, a camping coach and the “Glenfinnan Diner”, which serves refreshments and meals in summer. Both coaches are parked in the station sidings (refer to picture above left). The Museum is an award-winning must-visit site. Y 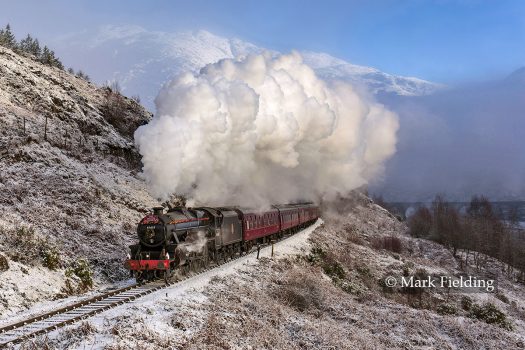 45407 climbs away from Glenfinnan Viaduct with the Festive Jacobite on 14th December 2017. A snow-covered Beinn an Tuim rises out of the mist behind.

There is much to see and do at Glenfinnan and the ScotRail service timetable provides plenty of options for a visit to the nearby Glenfinnan Monument, the associated National Trust for Scotland visitor centre and cafe  It is possible to take longer walks to view the the viaduct from above and below. There are great opportunities for hill walking and climbing. The camping coach is very popular with hill walkers and makes an exciting alternative which children appreciate. The Jacobite steam train calls at Glenfinnan.  Enough time is provided for passengers to visit the museum and purchase souvenirs and literature about the West Highland Lines and their history.

The most outstanding attraction, much heightened by the Harry Potter films and the Hogwarts Express, is the famous Glenfinnan Viaduct. Built in 1898 by Sir Robert McAlpine, as a mass concrete structure comprising 21 arches, it was an innovative civil engineering achievement when built. The Museum, with the aid of volunteers and grant funding has created a viewing path. The path leads from the station up the hillside and provides excellent views across the viaduct and the spectacular scenery. Note that the terrain is wild and rocky so the path does require stout shoes or boots and care. Click on the pictures below to appreciate the scale and spectacular surroundings. 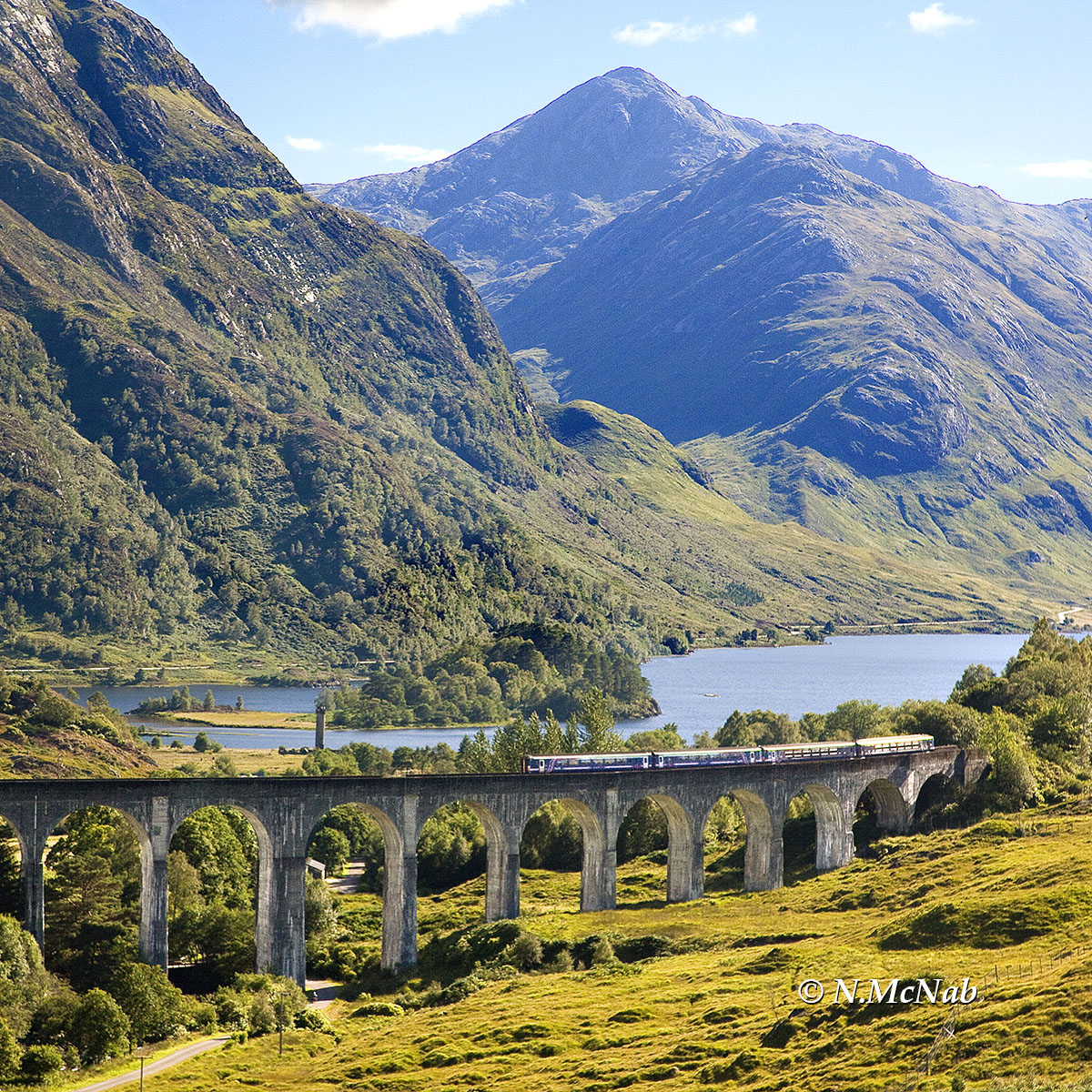 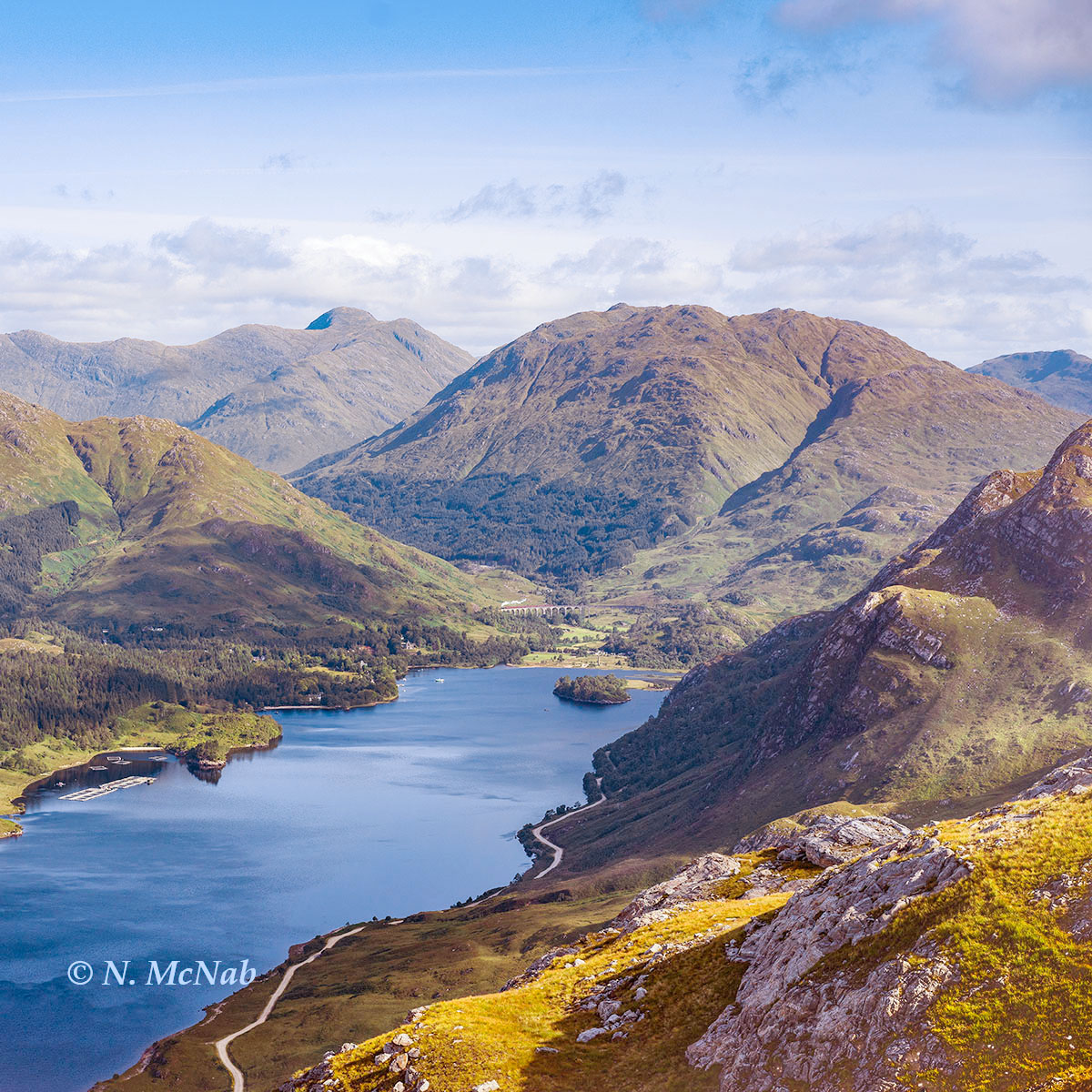 Eagle eye view over Loch Shiel to the Glenfinnan Viaduct and the Jacobite steam train.

Not only are the views at Glenfinnan spectacular, the scenery all along the ‘Mallaig Extension’ never fails to impress, whether in sunshine, rain, or snow. 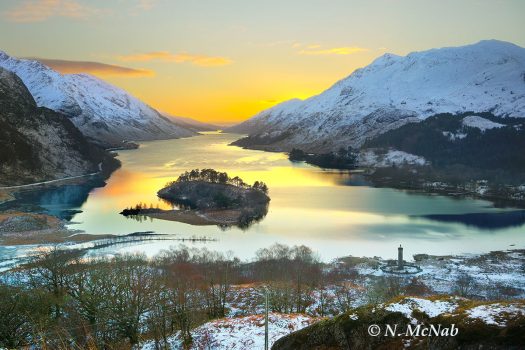 A winter view down Loch Shiel from near the railway. The Glenfinnan monument, standing at the head of the loch, commemorates the raising of the Jacobite Standard by Charles Edward Stuart at the start of the 1745 rebellion, the last civil war on British soil. Travellers on the ScotRail service trains can enjoy this view as they cross the Glenfinnan viaduct. Or you can add to the thrill of passing through this dramatic scenery and its associated poignant history, by travelling on the ‘Jacobite’ steam train from Fort William.

The highest point on the line between Glenfinnan and Mallaig is at Leac-a-Bhuidh, identified on the OS map as Creag Ghobhar (Goat Rock) where the line reaches a height of 361ft asl. The climb from Glenfinnan Station has a demanding start but the climb back from Mallaig is more sustained and starts from closer to sea level. At the summit the line passes through two tunnels under Creag Ghobhar. Click on the picture for a video of a steam charter tackling the gradient. A rare view since, unlike the ‘Jacobite’ train which runs tender first on the return journey from Mallaig, the video has the engine running boiler first.