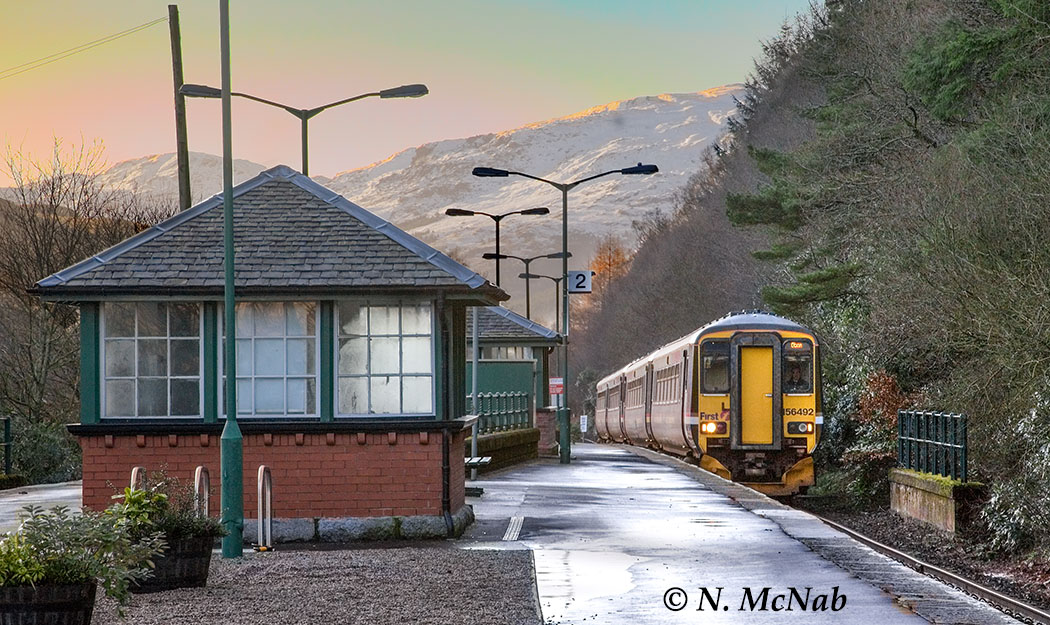 Arrochar and Tarbet station is between the villages of Tarbet (an Tairbeart) and Arrochar.  Tarbet, half a mile from the station, is on the bonnie banks of Loch Lomond, Scotland’s largest freshwater loch by surface area. On the other side of the loch lies Ben Lomond, Scotland’s most southerly Munro. There is a hotel, cafes and a local shop in Tarbet.  he pier at Tarbet provides access to the loch and a variety of cruise options are available, including a ‘Water Bus‘ which allows a number of different options to explore Loch Lomond and its surroundings. A footpath  links Arrochar to Tarbet and the distance is approximately 1.5miles. The walk is easy and provides for interesting views as it crosses the isthmus or narrow neck of land between Loch Lomond and Loch Long. Tarbet is the Gaelic word for such a narrow neck of land.

Arrochar, about 1 mile west of the station, is at the head of Loch Long which is a spectacular fjord-like sea loch. Arrochar can just be seen behind the trees on the extreme left of the picture above. There is accommodation, cafes and a local shop in the village. Across the loch from Arrochar are the spectacular ‘Arrochar Alps’, including Ben Arthur, known from its shape as “the Cobbler”. Forest Holidays has a log cabin resort on the lochside at nearby Ardgartan. 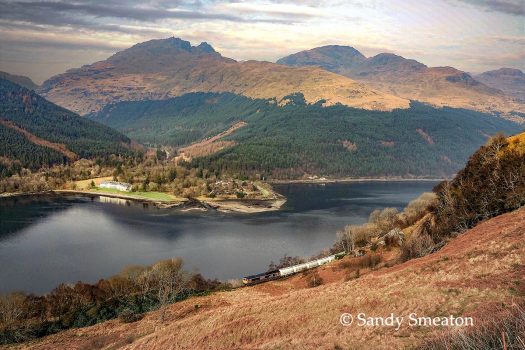 Arrochar and Tarbet are located on either side of an isthmus which separates Loch Long, a sea loch, and Loch Lomond, a fresh water inland lake. The gap is just over 2km and the Vikings were able to haul their longboats over the narrow strip of land to access Loch Lomond and advance their invasion into the heart of the country. The West Highland Line follows this gap and passengers can enjoy the changing scene as the line swings across from high above Loch Long to Loch Lomond. The picture, above left, shows a charter train crossing the isthmus, known as the ‘Tighness Gap’. The train is just about 200m from Arrochar & Tarbet Station. 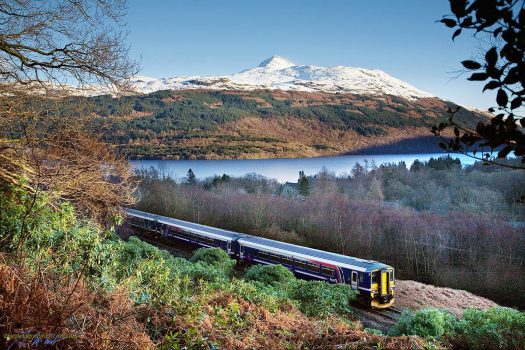 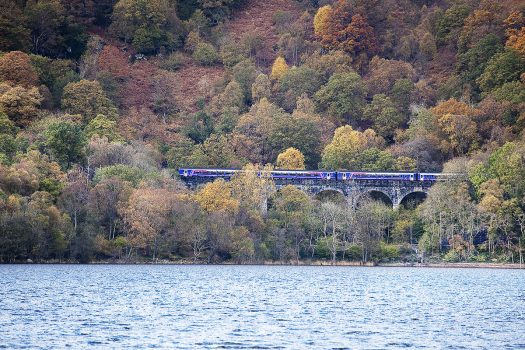 November 2013 and a southbound Oban & Fort William service crosses the Craig an Arnain Viaduct north of Arrochar & Tarbet Station. This is the only concrete and masonry viaduct on the West Highland Line. Most of the line at Loch Lomond side passes through native oak forest and this is one of the few views of the train. 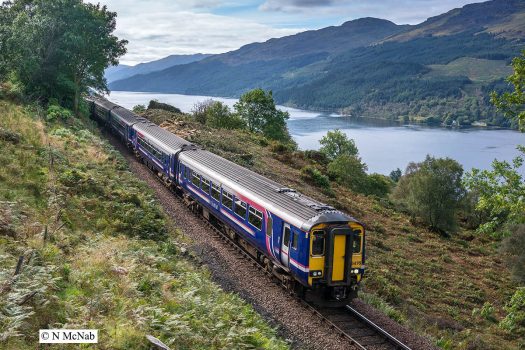 A 6-coach service, the front two coaches for Oban and the rear four for Fort William and Mallaig, passes above Loch Long just south of Arrochar, September 2016. The section has just had the thick stand of trees cleared to reveal the magnificant views over Loch Long. The loch is a sea loch, or fjiord, and connects to the Firth of Clyde.

A view across Loch Lomond of Inveruglas and the Loch Sloy hydro power station from Inversnaid. A service train is revealed as it passes a section cleared of trees. February 2012. (Picture Copyright N. McNab) 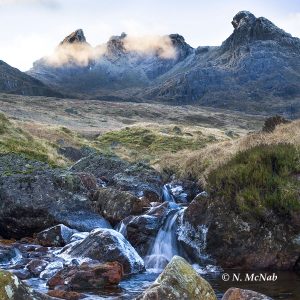