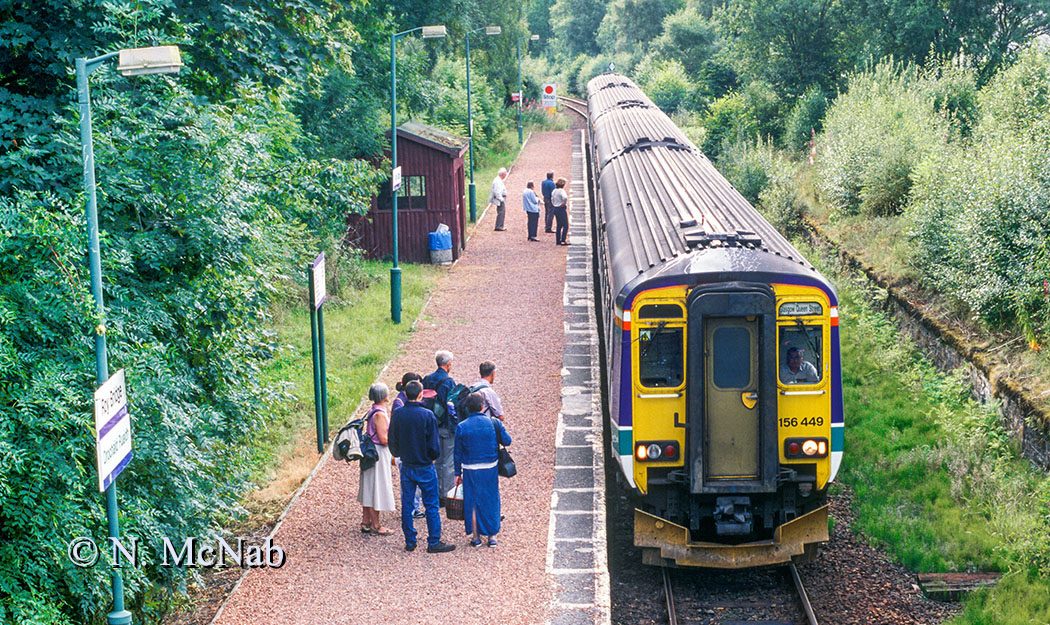 Roy Bridge is located about 5 miles west of Tulloch Station and 3 miles east of Spean Bridge. The village sits at the point where the River Roy joins the River Spean. Roy Bridge is conveniently located to take advantage of the many places of interest in the area and offers a more restful alternative to Fort William as a tourist base. It is well supplied with accommodation, a restaurant and a camping and caravanning site on the banks of the River Spean. Perhaps the most famous attraction are ‘The Parallel Roads of Glen Roy’ which provide one of the best examples of a succession of ancient shores extending round the slopes of Glen Roy, created by a glacial lake which filled the Glen and drained in stages as the ice retreated at the end of the last ice age. 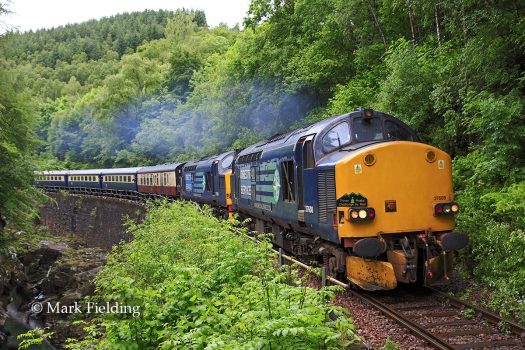 Between Tulloch and Roy Bridge the line shares the narrow route of the River Spean where it flows through the Monessie gorge. A spectacular place after heavy rain and snow melt when the river forms a foaming torrent which can reach the footings of the protecting railings at the side of the line. In normal weather and after a dry summer most of the waters of the River Spean are diverted at the Laggan Dam, through 14 miles of tunnels under the Grey Corrie mountains, to the aluminium smelter at Fort William. This leaves a relatively small trickle of compensation water flowing through the gorge, as in this picture by Mark Fielding taken in June 2013. The throaty rumble of two Class 37 diesel locomotives in the confines of the gorge is impressive. The sound of spate water in the gorge is almost frightening. 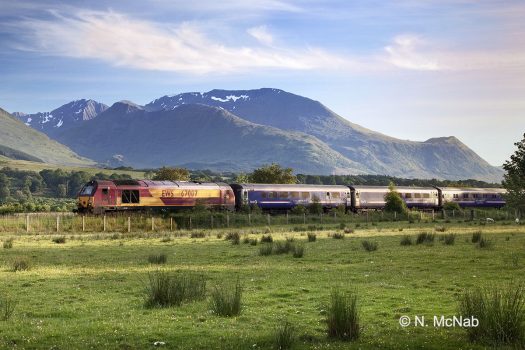 The Caledonian Sleeper to London Euston (Fort William departure 19.50) passing near Roy Bridge in July with the mountain Aonach Mhor in the background.

Aonach Mhor is the location for the Nevis Range ski facility and visitors can take a gondola lift for spectacular views of Ben Nevis and westwards across Loch Eil to the mountains of Kintail and as far as the Cuillin mountains on the Isle of Skye. The scene here is pastoral and the whole area from Tulloch is well-wooded with large areas of cleared grazing land. It makes for a very pleasing contrast to the wild upland country of Rannoch Moor. 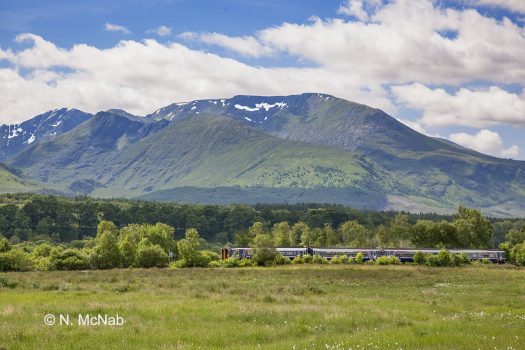 A warm July day. The Mallaig/Fort William to Glasgow service just east of Roy Bridge with Aonach Mor behind. 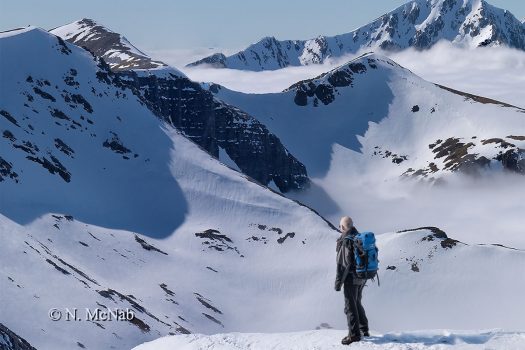 Above Roy Bridge – a range of mountains extending for 10 miles from Loch Treig in the east to Aonach Mor in the west. Click on the image for a panoramic winter view of the whole range looking west to Ben Nevis.

The range of mountains, which dominate the views to the south from Roy Bridge, is called ‘The Grey Corries’. So named because the upper slopes consist of quartzite screes which support little vegetation and hence provide various grey tones to the slopes. To the west, as an extension, lie the massive bulk of the ‘Aonachs’ (Aonach Beag and Aonach Mor), the ‘Small High Ridge’ and ‘Large High Ridge’ respectively. Some Gaelic sources also refer to aonach describing a green plain. The ‘Aonachs’ relative to the ‘Grey Corries’ are certainly better vegetated on the higher slopes. Aonach Mor has a vast high plateau which collects winter snow in large quantities and this attribute has been exploited for the Nevis Range ski facility.