Glenfinnan Station Museum is a rich source of knowledge covering everything from the line’s construction, engineering, commercial and human interest. Please enter the Museum Website from the sidebar on the right to access this information and much more. 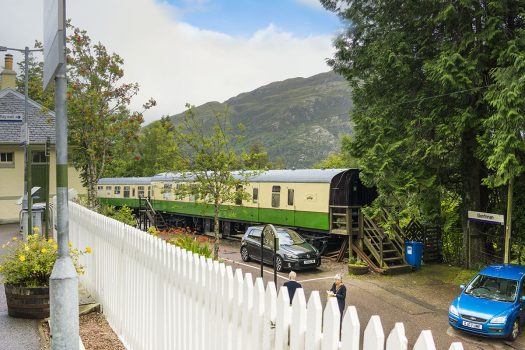 Glenfinnan was one of several stations on the West Highland Extension line to have a camping coach situated in its yard as overnight holiday accommodation, during the days of the London & North Eastern Railway (LNER) and British Railways (BR). The tradition was revived after Glenfinnan Station Museum was established in the early-1990s and two redundant BR Mark 1 coaches were relocated here. On the photo above, the Glenfinnan Sleeping Car and the Glenfinnan Dining Car. 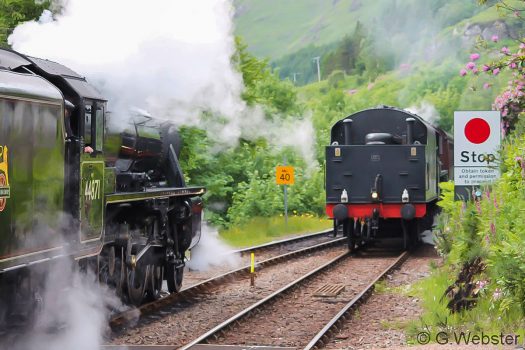 Steam passing at Glenfinnan, an everyday sight in the days of the North British and LNER when fish specials and ‘mixed’ trains were the order of the day. There are stories of days when up to a dozen trains full of herring could leave Mallaig harbour, sometimes with wet fish even leaking through the floorboards of the wagons and causing the trains to slip and slide! This is 2013, with ‘Black Five’ 44871 waiting for sister loco 45407 to clear the road, both hauling the ‘Jacobite’. 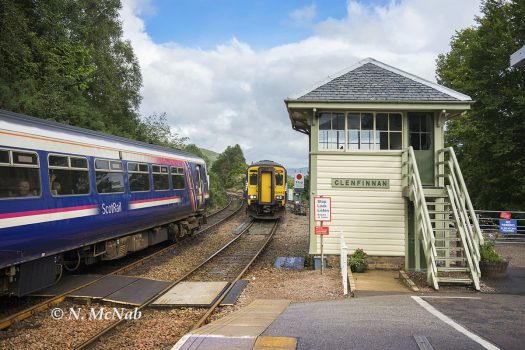 Glenfinnan has an excellent preserved example of the style of signal boxes built on the Mallaig Extension, a design by the Railway Signal Company, though the line itself was operated by the North British Rly. The box still has its original fifteen levers housed in a Stevens & Sons frame, now being restored for regular public demonstrations by museum volunteers. 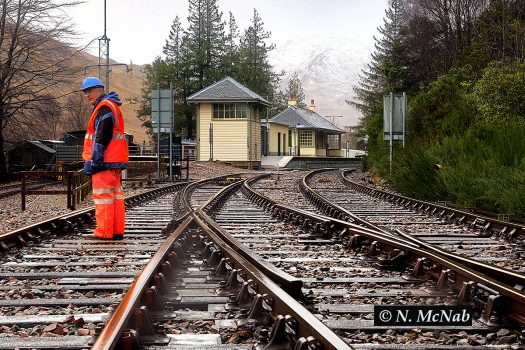 The token apparatus was always housed in the station building (still there today), inside the stationmaster’s office. Brass tablets were issued as authority for drivers to proceed along the single line sections, handed to train crews by hand, carried in a leather pouch with a large hoop for ease of handling.

Originally, the Glenfinnan signalman was responsible for the sections west to Lochailort box and east to Tomonie, near Corpach. Tomonie box closed in 1912 and the section extended to Banavie Canal Bridge. After Annat box opened in 1964, the token section east was Annat-Glenfinnan, but Lochailort box would close in 1966, meaning the token west now covered Glenfinnan-Arisaig. The introduction of RETB signalling in 1988 saw Glenfinnan box close and preservation on the horizon not long after. Semaphore signals were still extant until 1986 and the lattice post for the Down Home even survived in-situ until 2015. It has now been painstakingly restored – complete with an arm once again – by the station museum and re-erected in the yard, with a view to it being lever-operated from the frame again for future signalling demonstrations. 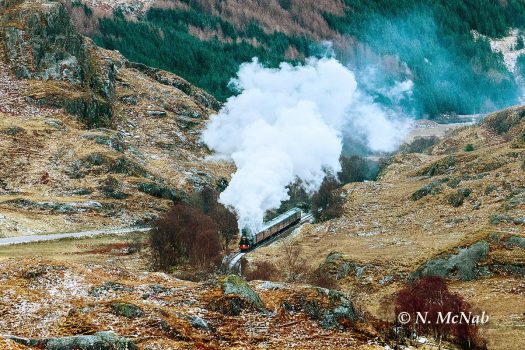 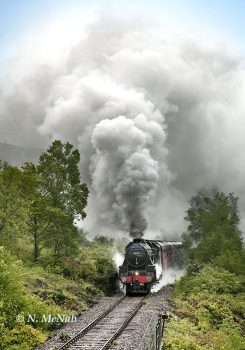 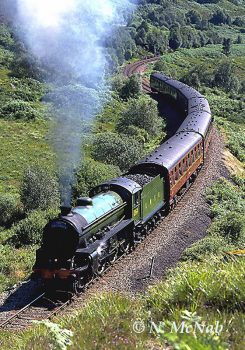 Towards Mallaig, the railway climbs out of Glenfinnan to a summit 361 feet above sea level at Leach-a-Bhuidh, at a fierce gradient of between 1 in 45 and 1 in 50. The start of the gradient commences at Glenfinnan Station, as can be seen in the centre picture. The left hand view is of a Christmas Jacobite working hard on this section, whereas on the right B1, No.1264, makes light work of the climb on a hot summer day (July 1999).

There was once a private halt at Leach-a-Bhuidh (Lech-a-Vuie); a small platform for the wealthy landowners, the Cameron-Heads of Inverailort and associated visitors to their estate. The station was request-only. Those wanting to use it had to inform the Lochailort stationmaster, who would in turn advise Glenfinnan for those heading from Fort William. For people travelling to Fort William the driver and guard of the train would be advised. Lech-a-Vuie platform was used for military exercises in the Second World War, but abandoned thereafter. Its remains can still be seen today.