The current Fort William station was opened by British Rail (BR) on 13 June 1975, replacing the old terminus that was formerly located on the shores of Loch Linnhe. The old station had a cramped layout and a lack of space for expansion, as it sat between a sea wall and the streets of the town centre. It made way for a new dual carriageway road which avoided Fort William town centre. 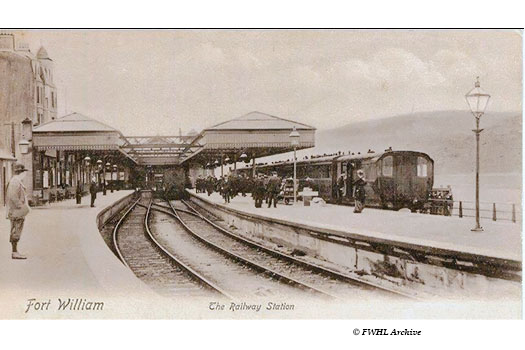 The original Fort William station was opened by the West Highland Railway on 7 August 1894, upon completion of the main line from Glasgow. It was the end of the line and built as a terminus, only assuming its present status as a through station (by reversal) when the branch line to Banavie Pier was opened on 1 June 1895. On 1 April 1901, the branch was extended and the full line to Mallaig was opened. For a long time after, the Mallaig route was self-contained, with few through trains running from Glasgow. Being entirely separate workings, using different locomotives and coaching stock, it meant the station was very busy and platform space was limited. This was exacerbated by often lengthy double-headed trains and remarshalling of vehicles. Parcels vans would often have to be attached and re-attached to/from services, as did restaurant and sleeper cars. Over and above that there were fish vans from Mallaig which also needed shunting, often attached to passenger trains or, more appropriately, ‘mixed’ services.

One of the three platforms at Fort William ran right along the sea wall, extending on past the buffer stops of the other two, and on to the roadway for a short section where MacBraynes buses met the train. At the adjoining pier, passengers could change on to steamers to head for the Isles, so it was a very convenient transport hub. The station nameboards proudly read “Fort William: For Ballachulish, Glencoe and Kinlochleven”. A signal box guarded the single line section between the station and Mallaig Junction, where the Mallaig and Glasgow lines diverged (now named Fort William Junction). 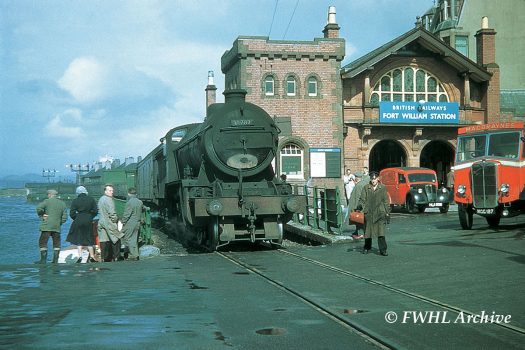 The original Fort William Station in the 1950s.

Along the single line was the original Fort William goods yard and – just further north – the Motive Power Depot (MPD).
The various manoeuvres involved to shunt trains at Fort William were the responsibility of the station pilot. A North British Rly ‘C’ Class 0-6-0 would perform this duty, right up until the end of BR steam in the 1960s, by which time they were re-classified as LNER J36s (BR Class 2F). Towards the end in the late-1950s/early-’60s, duties included shunting the ‘Beaver Tail’ observation car which was used on the Mallaig road and had to be taken to the nearby shed to be turned on the turntable.

Fort William Motive Power Depot (MPD) was used for servicing steam locomotives used on the West Highland and Mallaig Extension lines from the days of the North British and LNER up until the end of BR steam in 1963. Its shedcode in BR days was 65J, latterly 63B in the 1960s. There was a sub-shed at Mallaig.

Fort William included a two-road engine shed and vacuum-operated turntable. In BR days, Peppercorn K1 (for Mallaig traffic) and Gresley K2 moguls formed the bulk of the locomotive allocation, alongside several J36s as pilots for the shed and goods yard area, plus Fort William station. An ex-LMS Fowler 4F 0-6-0 – No. 44255 – was an odd inclusion for a while in amongst the LNER types towards the end of steam, kept for snowplough duty in the winter. Class 5MTs – both ex-LMS and BR Standard varieties – were daily visitors used on the Glasgow road. They were largely based at Glasgow Eastfield (65A) and double-headed on the heavier trains, helped by K2s plus the more-than-capable Thompson B1s. Fort William had its own allocation of ‘Black Fives’ during the 1950s.

Fort William MPD and goods yard were on the now-truncated section of line between Mallaig Junction and Fort William (Old) station. Following the opening of New Fort William station, goods became concentrated on Mallaig Junction Yard and a replacement locomotive depot was established at Tom-na-Faire, near Inverlochy. This included a small shed with inspection pits and fuelling facilities for diesels. In the 1980s, it became the servicing point for locomotives and stock used on the summer steam workings to Mallaig, a function that it continues to serve today.

The current Fort William station is located around half a mile north of the old one, incorporating a single, but lengthy, island platform (platform faces on either side are numbered 1 and 2). By the time the terminus opened in 1975, traffic was sparser and there was less requirement for shunting parcels vans and goods wagons. Locomotive run-rounds were the norm, far quicker and simpler than the often-complicated moves which needed a station pilot. 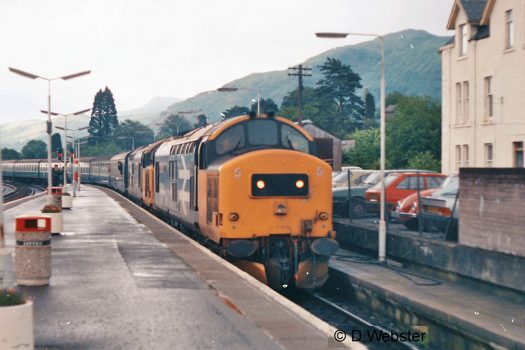 2nd August 1986 and the service train arrives, from Glasgow, at the new Fort William Station. At this time still locomotive hauled by Class 37s and, on this occasion, unusually double headed.

The addition of two long sidings was welcome and something which was lacking at the old station. The run-round loop on platform 1 is necessary today for loco-hauled workings including the daily ‘Jacobite’ steam services and the Caledonian Sleeper. Platform 2 has no loop, hence propelling manoeuvres became common and a pilot locomotive was still deemed to be required into the 1980s. A Class 20 diesel was frequently used for this, as well as working in Mallaig Junction Yard and performing the freight ‘trip’ workings to the aluminium smelter and Corpach paper mill. Crews in Fort William also became familiar with Class 08 shunters, though the ’20s’ were preferred, offering greater power and speed that made them better suited to local freight turns. They could also be pressed into passenger service when necessary and were sometimes seen on the lightweight teatime train to Mallaig in the early-mid ’80s.

Fort William station sidings have always been used for daytime stabling of the sleeper from London and there is still a ramp where cars used to drive up onto the train to be carried south (or unloaded). This was part of InterCity’s ‘Motorail’ service during the 1990s, where the sleeper had special vans attached which carried passengers’ cars for them all the way to their destination at London Euston, saving hundreds of miles’ driving. Motorail ended in the mid-1990s but the sleeper remains.
Signalling at the new Fort William station has been colour lights since 1975, though they are controlled manually from Fort William Junction signal box, using Track Circuit Block (TCB) working.