Crianlarich station opened concurrently with the West Highland Railway in 1894, doubling the number of railway stations in the village. In 1953, British Rail added the suffix “Upper” to the station’s name, in order to distinguish it from the nearby station (only about 300 metres’ walk along the north east access road) on the Callander and Oban Line which then became known as Crianlarich Lower. 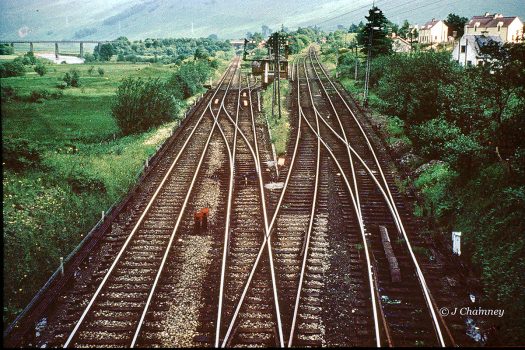 Crianlarich. The junction between the former Caledonian line from Callander to Oban, and the former North British from Glasgow to Fort William. On the left of the picture is the Strath Fillan viaduct of the latter line. The junction was put in to allow the exchange of wagons between the two systems in 1897. After the rock slide in the 1960s, in Glen Ogle, the C&O was closed east of Crianlarich and the trains transferred to Glasgow Queen Street which used the connection, shown above, for passengers.

Since closure of the Callander and Oban Line east of Crianlarich in 1965 (during the Beeching cuts), all trains to Oban have been routed up the West Highland Line as far as Crianlarich Upper station. They then join the remaining part of the Oban line by means of the chord, which had formerly been infrequently used. Crianlarich lower yard was retained for loading timber onto trains until the early-1990s. For many years, a daily freight ran between there and Corpach pulp mill, where the timber was processed into paper. Such workings had to reverse and use the chord from Upper station. Much of the trackbed and former yard has remained derelict since closure and there were even plans revealed in the railway media during the 2000s for the track to be re-laid for a timber ‘super yard’ but this project was quickly shelved. This was a sign of things to come as all West highland timber traffic ceased soon after once the market changed.

The goods yard alongside the down line at Crianlarich (Upper) station was also used for loading timber for many years. Trains operated mostly during daytime hours, with locos often stabled while loading took place. English Welsh and Scottish Rly (EWS) recast the timetable around 2002/2003 and instead operated at night (see Arrochar’s History section for more info) until traffic ended in 2006. AMEC-Spie railfreight also had a stint using the sidings in 2007/08. In the present day, the yard still continues in use, along with the Up sidings, where road-rail vehicles use the ex-North British Rly engine shed. A turntable was located adjacent and this continued to be used for local workings until the end of steam. 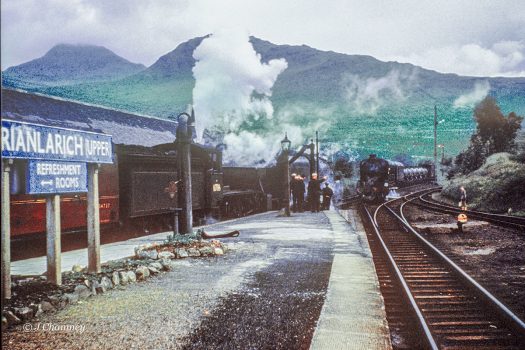 A weed killing train in operation at Crianlarich, 1958 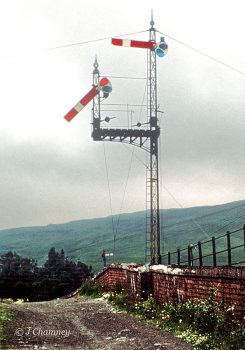 The WHL was equipped with Stevens & co. Signals. The starting bracket signal controlling transfer working between the NBR and CR lines at Crianlarich.