Ardlui is one of several West Highland Line stations where trains use right-hand running through the crossing loop, a practice in existence since 1988 when Radio Electronic Token Block (RETB) signalling was introduced. This gives easier access to the sidings, still frequently used for track maintenance machines.

The two pictures above illustrate the change. The left hand picture shows the Southbound class 37-hauled train arriving in the traditional ‘UP’ side with the signalman and footplate crew getting ready to exchange the single line token. On the left platform is a rail tour to Mallaig with the passengers sheltering from the rain under the overhang of the signal box (now removed).  The right hand picture shows the trains  passing to the right, after RETB was commissioned. The southbound train has a dusting of snow collected further north, probably as it crossed Rannoch Moor. 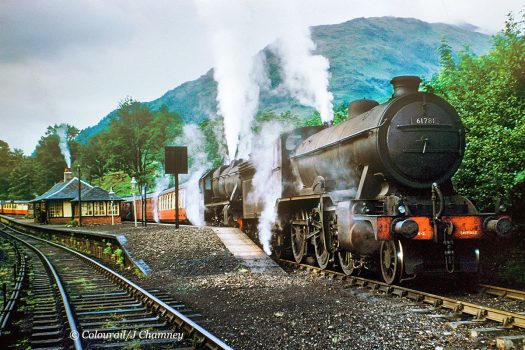 Ardlui 1958. 05:45 Glasgow to Mallaig. Both locomotives (K2 & Black Five) are taking water. The train comprises a brake compo, a standard sleeper and a first sleeper from Kings Cross, followed by the Glasgow portion which includes a restaurant car serving a full breakfast. This is a long train and the rear can be seen beyond the station buildings. Due to the length of the train, and the cramped space in the old station at Fort William, the K2 is detached at Corrour.

With RETB, it is also normal for trains to stop at stations so drivers can send and receive the electronic token for the single line ahead, communicating via radio with Banavie Signalling Centre. Ardlui has been a traditional crossing point ever since the line opened and today ScotRail services are frequently timetabled to pass here. However, the station is known as an Intermediate Token Exchange Point, meaning a driver is sometimes able to receive a long section token to pass through without stopping. Long section tokens are also provided for drivers heading through Glen Douglas loop.
The old goods yard loading platform still survives at Ardlui, as does the small, platform-mounted signal box, now in use as a waiting room. Sadly, the West Highland Railway ‘Swiss chalet’-style station building had to be demolished in the 1970s due to subsidence.

EARLY HISTORY
The promoters of early railway schemes for the West Highlands were not unwilling to tolerate a water-break, at least in the short run, exploiting the Loch Lomond steamers. With connection from Balloch, Ardlui was the starting point for the south-to-north arm of the cruciform Scottish Grand Junction project – its east-west arm running from Stirling to Oban. Much reduced from this grandiose vision, the Scottish Grand Junction Railway was eventually authorised as an Ardlui-Crianlarich-Oban, line; but the financial climate of the 1850s was not propitious and the scheme was abandoned.
The Glen Falloch Railway, promoted in 1887-8 but not pursued, was ostensibly a harmless branch connecting the Callander & Oban Railway with Ardlui and the Loch Lomond steamers. However, it was caught up in the machinations of the Caledonian Company and the North British, from which the West Highland Railway emerged two years later. In an unsuccessful attempt to block the West Highland, the Caledonian hastily re-activated the Glen Falloch scheme, for which plans were ready to hand.
In North British days, with the West Highland nominally independent until 1908, Ardlui became the frontier between Glasgow and Fort William administrative districts. In respect of local traffic and the elaborate summer tours and excursions which brought the West Highland into the Clyde Coast network, the southern half of the route logically belonged to Glasgow. Some summer weekend trains – even in their final, DMU-operated, period – reached beyond Arrochar & Tarbet to Ardlui and Crianlarich. There was one particular Summer Saturdays-only Glasgow to Ardlui service in BR steam days that was extended in 1957/58 to Crianlarich, where the locomotive could use the turntable.
Under the LNER and on into the BR period while steam endured, Ardlui saw the regular winter crossing of the ‘evening’ Glasgow-Mallaig and the ‘afternoon’ combined Mallaig-Glasgow/Fort William-Kings Cross ‘sleeper’, when Eastfield (Glasgow) and Fort William depot enginemen exchanged locomotives. (On Saturdays the down service sometimes left later and the trains met instead at Glen Douglas.) Ardlui’s passing loop was reputedly a tight fit for any lengthy rake, and there are stories, perhaps apocryphal, of complicated shunting and remarshalling, on occasions when it somehow escaped notice that both the northbound and southbound services had been strengthened and double-headed.
The ‘via Ardlui’ imprint on West Highland passenger tickets survived state-ownership, there being (with some exceptions) no availability via Stirling and Callander, or vice versa. Rationalisation and flexibility, in the public interest, were slow to follow nationalisation.