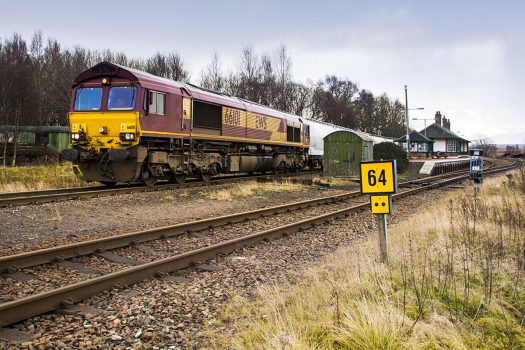 Alumina Freight at Rannoch Station. For the foreseeable future there will be few passengers travelling on The Lines.

In the middle of March it was announced that ScotRail trains would be halved in frequency on many lines including the main Edinburgh-Glasgow route, which will be cut to half hourly. Services ended early, with the last trains leaving in mid evening on some routes.

Transport Secretary Michael Matheson warned passengers: “We know rail provides an important service in moving passengers and goods around the country. However, we will reach a point where travel is reduced to essential journeys only.”  A Spokesman for ScotRail said: “The service level will deliver more than enough seats to meet the current demand levels.”

A spokesman for Transport Scotland said: “The reduction in services will be similar to a Sunday service, with some additional first and late last trains for key staff. Off peak passenger services may be further reduced in relation to demand.”  However, despite a 55 per cent downturn in passengers usage, in late March some commuter trains in the Central Belt were still crowded with all seats taken and aisles full of standing passengers.

Freight trains, such as for supermarkets, were given higher priority. Rail Freight Group Director General Maggie Simpson said: “In these unprecedented times, the rail freight industry is doing all it can to ensure delivery of vital supplies for supermarkets and retailers, manufacturers and businesses, and to support communities across Scotland. We welcome the support of Scottish Government and Scotland’s Railway in ensuring freight services are prioritised on the network.”

In the last week of March, Scotland’s Railway was temporarily nationalised to help the service cope with the impact of the virus. The Scottish government said ScotRail, along with Caledonian Sleeper, would be supported financially to be able to maintain necessary services for essential journeys. A Transport Scotland spokeswoman said it worked with ScotRail and Caledonian Sleeper to amend their contracts accordingly.